The Oz federal budget was released last night, so news feeds and social media here have been abuzz with talk of dollars, cents and numbers of all kinds. I must confess that the annual budgets don’t usually result in any additional benefits for me (often the opposite), so I pay little attention.

Rather, I’ve been pondering on the relative importance of numbers: when they matter; and when they have no meaning.

I’ve long contemplated the ‘to weigh, or not to weigh’ concept. I’ve written about being defined by numbers AND the fact that I let the scale judge me and my behaviour.

The not-dieting approach I am considering (attempting?) recommends not-weighing, or not over-weighing… if that makes sense.

I’m yet to work out exactly what approach I need to take and for that reason I initially decided against participating in Chubby Girlfriend’s May challenge – to lose 1 pound each week. The challenge was issued early last week when I was in a state of flux after some unhealthy eating episodes and – as a result – was reticent to go anywhere near a set of scales! Fortunately Chubby GF was flexible in her approach and said we could use measurements or similar, but then…

My actual weight aside, Chubby GF’s challenge involved pounds. We (here in Oz) are so evolved (!!!) we work in kilograms and centimetres and the whole (you know…) metric system. Given that nearly half of my blog readers are non-Aussies I’m conscious of this and try to translate kilograms into pounds (etc) when possible. I figured in this instance I’d do the same. I’d weigh myself and then translate it from kilograms into pounds for the challenge. But then…. I remembered that I could – of course – change the measure on my actual scale. D’oh!

So I did. And dutifully took a picture (of the weight in pounds) as required for the challenge. The number in kilograms had been a couple of kgs heavier (resulting from the aforementioned unhealthy eating) and typically depressed me. But the number in pounds… meant NOTHING! 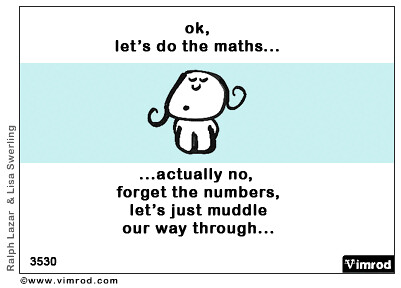 It reminded me of comments I made about my measurements in one of my earlier posts. Although I said I felt TERRIBLY judged by the numbers on the scale – bizarrely – the numbers on the tape measure meant NOTHING. Sure I knew they were way more than they should be… but 130cm, 110cm, 100cm… W-O-T-E-V-A!

As required this week I got on the scale (still set in pounds) and it had gone down a little. But… the numbers still meant nothing.

I recall years ago trying to focus on the weight loss only, starting with the non-confrontational: 0; and measuring my weight in -1.0kg, -2.5kg and the like. I graphed the kilograms lost rather than those remaining on my body!

Although I’m sure that I’ll still jump on and off the scale more than I should HOPING for lower and lower numbers, I’m kinda liking that the numbers on there (at the moment anyway) are meaningless. I’ve been hovering around the same weight (105.5 – 109kg) for the last six months and I keep seeing the same numbers on the scale – up, down, up, down. So it’s refreshing to not constantly be reminded of my dream to reach double digits or the sense of deja vu each time I see 107kg appear.

I wonder if this is just a case of ‘pot-ay-to / pot-ar-to’ and if within weeks I’m as obsessed with the pounds as I have been with the kilograms?

I’m still on my not-dieting path and haven’t done any bingeing for a little while. AND… I’ve been eating those things I haven’t for a while – pasta (including ravioli), rice and noodles and the like… AND potato on non-weekend nights. I’m not yet eating intuitively and mindfully (considering when I’m full and stopping rather than polishing off whatever’s on my plate), but I’m trying – for a change – to trust myself a little.

I know the scale can torment even the sanest and most zen of people.
Do you weigh, or not-weigh? Or are you somewhere in between?
Do some numbers matter to you more than others?