This post has been sponsored by Nuffnang and Kraft belVita Breakfast biscuits.

I’m not a morning person. In fact, back when I was working, mornings were always executed with regimented precision. There was no room for dillydallying. As a single woman with only myself to organise I could be up, dressed, breakfasted and out of the house within 20-30 minutes.

Friends with kids envied the speed at which I could organise myself. Sure, I didn’t have a partner or kids to nag and cater for, but even as a singleton, free time was a rarity. The idea of wasting even a moment was unheard of.

I’d usually eat breakfast as I dressed, or if I sat down at all I’d shovel food in my mouth as I checked my emails.

Even better… when I drove into work, the streamliner in me worked out I could save even more time if I ate breakfast in the car.

Each day I’d make up a bacon and egg toasted sandwich and place it on the seat beside me, taking a bite every time I stopped at traffic lights (and yes I know eating while driving isn’t entirely safe or smart!).

Other than not running into the car in front of me, I also had to avoid the age-old issue of egg-stained work clothes! I’d cut the sandwich into quarters to make it more manageable but rarely did I make it without globs of poached egg falling into my crotch or accidentally wiping my greasy fingers on my clothes. The whole thing was an accident waiting to happen.

It’s pretty much universally agreed that breakfast is the most important meal of the day so given our busy lives, the idea of being able to have something quick and healthy is extremely appealing. The two words have not traditionally been synonymous. Quick is a chocolate bar, a can of diet coke or a donut. Healthy is a painstakingly-prepared plate of fruit with some yoghurt or fibre-laden cereal. 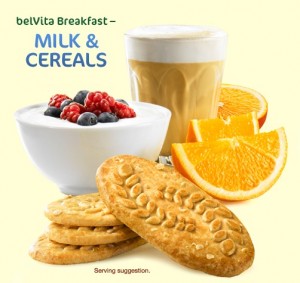 Kraft belVita Breakfast biscuits are biscuits with a difference. With no added colours and preservatives and made from five wholegrains, they are an excellent source of fibre.

Best of all, a low GI rating means they’ll keep you full for longer; something that many ‘health’ bars can’t promise.

Since moving late last year I’ve become good friends with another recent resident. Ruth has been living in the UK for 13 years and just returned to Oz with her delightful little boy.

belVita Breakfast biscuits have been around Europe for ages so she’s not a recent convert.

“I used to eat them while I was breastfeeding,” Ruth tells me, explaining that the ability to eat one-handed is an essential skill for busy mums. 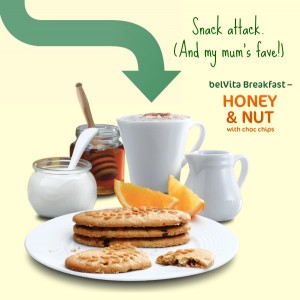 She’s continued her love affair with them here. “They’re a great snack,” she tells me. And she’s also put her own mother onto them. In her early 80s Ruth’s mum is a little frail and struggles to eat a good breakfast. Ruth realised belVita Breakfast biscuits offered her mother the sustenance she needed without having to resort to tasteless protein powders.

My own mother is also a new fan of the breakfast biscuit. Her social and exercise commitments leave my social life for dead.

Two mornings a week she’s out early for exercise classes and two other mornings she has volunteer stuff and then there’s church on a Sunday. I suggested she try belVita Breakfast biscuits as a pre-church or breakfast option on those days she has to head out of the house early.

Always happy to play guinea pig help me out with my blog posts she diligently sought the biscuits out and was particularly surprised at how full they kept her. Mum’s pretty health conscious so examined the label and was happy with the 220(ish) calories in each four-biscuit serving.

She particularly likes the fact the biscuits are ultra crispy. And as I’m a texture-girl, I’m with her on the grainy and crunchy texture.

Here in Oz, there are 5 flavours to try, including: Honey & Nut with choc chip; Milk & Cereals; Crunchy Oats; Fruit & Fibre; and a new Cranberry flavor – released this month.

To ensure there was some scientific veracity to her taste test (and cos they were on special at one of the local supermarkets) mum actually bought a few flavours. She said the fruit and fibre biscuits ‘felt’ more like a breakfast option, but loved the honey and nut (and chocolate chip) biscuits which she thought she’d use for snacks – and has indeed been offering them to visitors.

I agree with both mum and Ruth who recommend them as snack options, particularly given that portion control is already taken care of, with each four-biscuit serving size in separate packets. 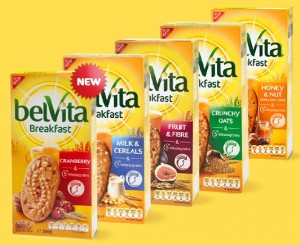 A good snack for me is something that’s about 100 – 150 calories and belVita Breakfast biscuits certainly fit that bill.  It’d be easy to throw a packet in your work bag for daytime snacks and with a low GI and slow release energy they’ll help you avoid the 3pm sugar crash and stop you raiding the fund-raising chocolates (not that I’d ever – ahem – do that!).

But belVita Breakfast biscuits aren’t just for the grown ups. They’re an easy option for the kids’ afterschool snack or handy to have in the car (as a non-messy option) for long rides.

I received the new cranberry belVita Breakfast biscuits to try (hot out of the oven – well, before their in-store launch) and while explaining to my building manager what my parcel contained, discovered that her very-cute kids are fans. “They like the fruit ones,” she told me.

So… because I’m a nice gal I handed over some of the new cranberry flavored biscuits, which were a reported hit. 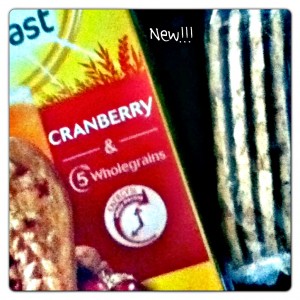 With one serve of belVita cranberry containing 10% of our daily fibre intake and half the daily target for wholegrains (recommended by the Grain Nutrition and Legume Council) I’m sure they’ll be popular with mums (feeding the kids fun food which is surreptitiously healthy) and health-conscious peeps alike.

The verdict from my intricately-executed experiment seems pretty unanimous. Perfect for multitasking mums, hungry kids or busy lives, belVita Breakfast biscuits offer a quick and easy snack and is far healthier than many of the other fast food / snack options out there.

Would you consider trying Kraft belVita Breakfast biscuits or are you already a convert?

Would a quick and healthy breakfast / snack option make your life easier?

* Disclaimer: This post has been sponsored by Kraft belVita breakfast biscuits and Nuffnang and I was provided with Cranberry belVita Breakfast biscuits for review. All opinions expressed in this space are mine, written with the objective of giving readers my (and my interviewees’!) personal opinion(s).

As a warm-up to the maroon and blue State of Origin series starting shortly, on Wednesday 24 April belVita Breakfast will be hosting a Mumathlon event in Sydney, where four mums or dads will compete to find the top mum-athlete in a series of challenges.

Each mum-athlete will be selected by MixFM, who will be hosting regional competitions from 18th April in Adelaide, Melbourne, Brisbane and Sydney. To compete in the regional Mumathlon’s, MixFM listeners will have to call up and say why they think they are the top mum-athlete, detailing all the things they get done in the morning. One caller will be selected each day to compete in a challenge against other daily winners to crown the regional winner at the end of the week.

The mum-athletes will have to navigate through a series of challenges and the winning mum-athlete will walk away with $10,000 – nothing to sneeze at, and hopefully with less bruises and breaks than the rugby league players!