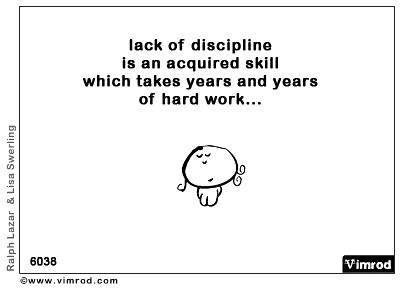 Yesterday I drove into work so lugged several days’ supply of vanilla diet coke into the office with me. I’d given the stuff up earlier in the year, but restarted my love affair a couple of months ago. And, after a couple of weeks of 1+ litre days recently I’ve tried to reduce my intake yet again. But as I left home with my supplies the thought popped into my head that IF I wanted more than my usual one 600ml bottle that day, I’d have some on hand to have another.

At this point, Angel Schmiet said: No, you’re cutting back and only allowed one bottle.
And naturally, in response Devil Schmiet popped up with: Oh, W-O-T-E-V-A…. it’s nearly Christmas. Wait until the New Year to start worrying about that sort of thing.

As it happens, Angel Schmiet won the day, but not without the need to FORCE myself into some self-analysis. Yes, I know… usually I have to stop myself overthinking, but on this occasion I had to pause and seriously think about what I was saying. There I was, back in that old mindset… Och, the diet can start on Monday, I should eat, drink and be merry while I can.

It reminded me of how fragile one’s willpower and ‘mindset’ can be.

During my weekend blog reading I came across the latest post from Chubby Girlfriend (of Boyfriends Make You Fat fame) who was talking about the fact that she’d been pretty unhealthy in her eating of late. At the time, here in Oz, it was just after lunch on Sunday and I was contemplating a visit to the shops for some ‘treats’.

Other than the inclusion of wine in my diet (usually in lieu of carbohydrates with dinner) I’ve been pretty healthy on week days and nights. I’ve been exercising almost every weekday over the past few weeks and quite happy with my endeavours after deciding to renew my weight-loss efforts.

However…. a few weekends ago I bought myself a LARGE caramello koala as a treat (you may remember it from the photographs and the Caramello koalas 101 blog post).

Then… two weekends ago, not only did I buy a large koala, but also a large freddo frog.

And this past Friday night as I left work (a bit earlier than usual) after a long day, I popped into my local grocery store for some essentials (I’d decided I was allowed to have some potatoes with my fillet steak for dinner and was already excited about the evening’s menu); and once in there I saw a bag of 12 caramello koalas. On special! (It was fate!) And, what did I do? You guessed it. I picked up the bag, paid for it and took it home.

It’d been a few weeks since I’d indulged in over 200g worth of caramel-filled chocolate. But… I got home, poured myself a glass of wine and literally INHALED the chocolates. So, within about 30 minutes, and by the time I would usually have arrived home from work, I’d eaten all 1200 calories worth of koalas but didn’t yet feel full. I did, however… feel like absolute crap.

Suddenly overwhelmed with tiredness I stretched out on my ottoman and closed my eyes. Before I knew it an hour had passed, it was approaching 8pm and I woke up feeling groggy and confused. The most-excellent night of fillet steak, faux roasted potato with peppercorn sauce and US ‘So You Think You Can Dance’ was ruined. And, I still felt like crap.

I must confess, I did (at that point) wonder if my favourite chocolate delicacy is (in fact) gluten-free, as extreme tiredness and blahness after eating something laced with gluten is an occasional symptom, but am now loath to check up on it for fear I may need to stop indulging… Although, like the feeling one gets with a hangover, I did – at least – think that the whole episode would put me off overindulging in more koalas anytime soon.

And did it? Nope. Of course not.  Early Saturday morning (ie. the very next day) as I did my weekly grocery shop, with barely a second thought, I threw into my basket, not only a bag of caramello koalas, but some corn chips AND some faux cheezels (called ‘Cheese rings’) as well.

There were moments of guilt – naturally – but I was already telling myself it was some sort of treat. Just a little treat that, even I, was worthy of.

Of course it was all consumed, as well as the steak and potatoes (and Wirra Wirra Church Block) planned for the previous night.

But Sunday, although I didn’t feel panicked, I felt a sense of dread. One part of me was planning my next outing, ie. THAT day’s purchase of caramello koalas and maybe some corn chips. But not the cheezels… after all, I’m dieting. (!!!!) But the other (sane) part of me felt like the control was slipping away from me. And I was allowing it to happen. Consciously.

I knew I’d be okay once the working week started again, treats not being part of my weekdays. But, sitting at my computer contemplating my purchases, I was figuring that I’d already been pretty evil that weekend… ‘I might as well continue and start afresh on Monday’. Sound familiar? Oh, yes…. (*everyone nods*)

I’d been there before. My last effort at Weight Watchers (mid – late 2010) wasn’t at all successful. And this was mainly because I was awesomely good (diet-wise) during the week…. and then I’d go and weigh-in on Saturday (to minimal weight loss) before having post-weigh-in ‘treats’ all weekend. As a result, my weight would have increased by a couple of kilograms by Monday and I’d spend all week getting my weight down again for the next less-than-impressive weigh-in before again partaking in weekend treats. Three words: BIG VICIOUS CYCLE! I got nowhere.

As a result, when I started this weight loss program earlier in the year, I didn’t really allow myself ANY ‘treats’ for fear they would start to invade my weekends and stage a mutiny. Which is exactly what has been happening!

Until I read Chubby GF’s blog.

Her words: “When I eat sh*t, I want more sh*t” reminded me of what I was about to do and WHY it was becoming easier. Almost like a habit. Again. Each time I bought something unhealthy it was less and less of an issue. The niggling worry at the back of my mind was just as much about how easily I was slipping into old habits as it was about the individual decisions I was making.

So, I didn’t go and buy more unhealthy food. Instead, I tried to be ‘mindful’ and reminded myself of how far I’ve come and the fact that each bad decision made the next one just a little bit easier. So… amazingly (for me), I  just didn’t fucking do it!