There are times when I’m so inspired that I have to sit and write a blog post – even if I’m in the middle of a gazillion other things.

This, you’ll be thrilled to know, is one of those times. And I have two of my fave bloggers to blame thank for this eruption of self-awareness… or possibly whatever is the opposite (self-ignorance?).

Interestingly though, it’ll be building on something I started writing last year, similarly inspired. But… here’s the rub (don’t you love that saying? I don’t really understand it or its origin, but it’s got a certain je ne sais quoi to it!) – in October last year when I sat down to write, I got stuck. Big time! 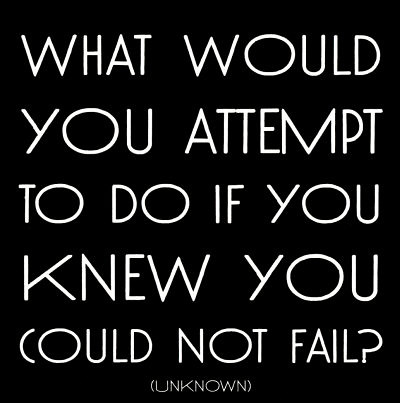 This all started marinating around my little brain a few weeks ago when Karen, from Before & After, wrote a post featuring the ‘What would you do if you knew you could not fail?’ quote. I commented that I’d seen the quote late last year and was so excited by the concept I had my fingers poised to respond, before I realized I had NO FRIGGIN’ IDEA what to write.

Then, on the weekend I read Jules’ latest Big Girl Bombshell post. Her very exciting news is about a book she will soon be launching. Her desire to write, she says, has long been a secret dream, and her post ended by asking: “What is your secret dream?”

Again, I sat at the keyboard, fingers at the ready. And stopped. Shit!  It required more thinking than I could muster on a Saturday morning, so instead I left some glib comment about not-working. “Perhaps writing,” I said.

Then I continued my day’s blog reading and came to Karen’s latest ‘Before & After’ post.

Karen’s come a long way in her weight-loss journey and is now a non-dieter. She’s always come across (in her posts and in her book) as very calm and zen. But lately she’s struggled a bit with some old demons. She’s been questioning her behaviour and coping mechanisms, but in Saturday’s post she writes that she’s realized she’s been asking the wrong question and – she needed to look at the ‘why’ rather than the ‘what’.  Her post ended with a challenge for her readers: What better question could we be asking ourselves?

All of these thought-provoking posts early on a Saturday morning was just too much for me. I was feeling tired and emotional and as a result:

I continued my blog reading (yes, I knocked off 68 unread posts, emptying my Google Reader – which incidentally featured in my ‘Photo-a-day’ challenge for June, under the theme of ‘Empty’. Meaningless to some, but important to me after a few hours at the computer!) and came across one from Skinny Emmie.

Anyhoo… Skinny Emmie’s vlogged about staying motivated (to lose weight and get healthier) given it can be such a long bloody trek!

Naturally, on first glance, my answers to Jules’ and Karen’s questions would be weight-related. My secret dream and what I want to do (if I could not fail) would be to bloody well lose weight and keep it off! Like Skinny Emmie, I don’t like the alternative. I don’t want to remain this weight and I don’t want to get heavier. That’s a no-brainer!

But… as I’m trying to remind myself that ‘I am more than my weight’ I decided that I wanted to take it out of the equation for a change.  Rather I want to try and imagine myself at an ideal weight or – indeed – any weight.

So then, body-image issues aside: What is my secret dream? What would I do if I knew I could not fail? And so, it seems… in response to Karen’s later challenge, a better question to ask myself is: ‘What do I want?’

It occurs to me, since turning 16 years of age I’ve spent so much time focusing on the weight, dieting, body side of my life that I don’t know what else I’m passionate about, or what else I want from life.

Is it contentment that I desire? And what the f*ck do I mean by that? Do I know what to do (or not to do) to achieve it?

Or should I be aspiring to love and be loved? And, is that enough?

I wonder if not knowing the answer is a bad thing. Will I continue flouncing about life…. searching…. for some indescribable much-aspired-to state only to remain thwarted in my challenge and left waiting, wondering… because I don’t bloody know what it is I want?

I often talk about putting my life on hold until I lose weight. (Which is a worry given that I am 44 years old!) But I now wonder: Is that it? Is that really what’s holding me back? Or perhaps it’s a lack of direction? Or  a lack of desire?

What’s your secret dream?
What would you do if you knew you could not fail?
What’s a better question to ask yourself?

Do you know what it is that you want?