So… this blog post is a little premature, but probably timely. Because, even though this diet program has 3-4 days left to run, we’ve had the last weigh-in, so it’s all over bar the fat lady. Or rather, not-so-fat ladies… cos it IS a weight loss program. (Sorry – didn’t mean to use the F word – though as I’m probably still in the obese category it is akin to me telling blonde jokes: I’m allowed because I’m in the same boat!) 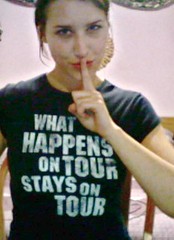 Meanwhile, back to my original point. Many of my program colleagues are already turning their mind to the ‘off-season’. And that is understandable. Like footballers and other athletes it is likely that we may ease up a tad on our regimental training programs and indulge in things that we may not partake in during the season proper. And by that I don’t mean nudie runs or frivolous one-nighters. (Although… the latter does hold some allure….) BUT…. I do mean that it can feel a bit like no one is watching…. so we feel ‘free’ to overindulge a tad.

I first touched on this a week or two ago when I wrote about the dangers of ‘dropping my guard’ between rounds of the program. Even then I knew this period of time was a red flag for me as I am well-versed in the ‘on’ diet / ‘off’ diet type behaviour. Many a-time have I ‘dieted’ until reaching my almost-goal weight before easing my foot off of the accelerator (for whatever reason) and thereby re-inviting escaped kilograms to return to the fold.

This time I want it to be different.

The important thing to remember is that: I am a LONG way from my goal / ideal weight. My ‘after’ photographs from yesterday reveal that. I took them on my iPhone (of me reflected in the mirror) and squinted as I uploaded them so as not to have to look at them. But…there’s no denying it (I’m not being tough on myself when I say ‘ugh!’); it’s not a pretty sight.

Yesterday’s post may have sounded like I was being hard on myself. But frankly I think I need it. I need to remind myself that I’m still officially obese (for fuck’s sake!). I’m not exaggerating when I say that I still look horrible. In my mind (and others’ I assume) I still do not look like someone men would be physically attracted to. I can’t blame them for that. I can’t sit about and scoff at their superficiality; because I agree. I don’t like very fat men, so why should anyone like me? In that way.

So… you get my point. There’s a LONG way to go. And now… as this round of the program draws to a close, I’ll have a month or so off, before the next round starts. My promise, therefore, is to continue to lose weight during that time. Because I SHOULD be able to. I will NOT allow myself to ease up during the off-season and run amok.

What happens on tour will NOT stay on tour, as I shall be accountable. And not just to you, but also to me.