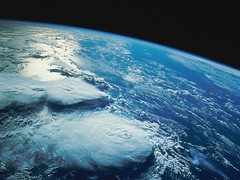 I forgot my lunch today. I know, I know…. you’re wondering how on earth the world is still turning on its axis. It may not be a biggie to ‘normal’ people, but it is to me because I ALWAYS bring my lunch. And on the rare occasions I’m without lunch to bring I cobble together a few weird options – a sachet of soup, yoghurt and nuts and the like.  But…. on probably all but a dozen occasions over the past 3 – 4 years (when lunches ‘out’ were planned) I’ve brown-bagged it.

There have been a few reasons that I’ve gone to the effort each day to ensure I have something handy to throw into my backpack: firstly I have (on occasions) been in jobs that have been frantic and not allowed me time to get out of the office at lunch; as a coeliac it’s sometimes hard to find gluten-free takeaway options; I’m dieting and trying to be healthy; and it’s cheaper. And I must confess those reasons are probably in order of importance to me. My packed-lunch habit has been less about the money, and more about the effort involved. 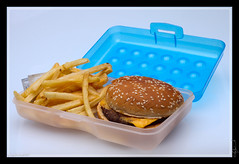 Don’t get me wrong – it isn’t as if I have a little cute esky with slots for each of my ‘courses’ and snacks. Nope… I’m not quite THAT organised. Once upon a time I constantly made leftovers which would be frozen in small containers and thrown into my backpack each day. Then on other occasions I have prepared (my version of) salad; but – most recently – I have souped every day.

I’ve mentioned before that I’m best behaved in the office, at work. In a dietary sense that is. In fact, I probably have too few calories during the day as I’m not great on the ‘snacking’ front. And, given my secretive binge-eating mentality, eating in public with no surrounding ritual just isn’t fulfilling. At all.

In my Goal without a plan post a few days ago, I commented on the fact that I needed to ‘work on’ my lunches a bit. In all seriousness, I have eaten La Zuppa gluten-free soups every day for about four months. I love them. They aren’t cheap but (as I said) that isn’t really the issue for me. They are handy (ie. 1. Open lid; 2. Zap in microwave; and 3. Eat); relatively not-scary in calories; filling; and come in cute containers. So, perfect for me. But as summer’s approaching I probably need to think of another alternative. And because I’m in some sort of weird (in between rounds of my diet program; and in between ‘seasons’) transition I haven’t quite got my act together yet. Spring sprung here in Oz last week so, because I started thinking of birds chirping (not really), flowers blooming (also not really) and warm weather (true, but with dread), I didn’t stock up on weekday soups as I normally would.

Which is why today I found myself lunchless. I had actually meant to throw some yoghurt and a packet of soup into my bag, but in the trauma of tidying the house before I left (yes, I am still keeping it tidy in case a potential buyer decides to visit), I forgot.

I pondered on what was in my drawer a work. Almonds. And that’s it. Fortunately I alight my train at a station which hosts a small grocery store (Fortitude Valley and Foodworks for any Brisbane-readers) so I popped in to find something handy. I ended up with a yummy Low Fat Greek Yoghurt in my fat little hand which will bring me great joy later in the day when I get to consume it.

But then… as I was walking out of the complex towards my office I found myself behind a tall and fit-looking young man (and yes, there was possibly some subtle ogling, I mean… HELLO!?!). He was in uniform-like exercise gear and I waited for him to turn into the gym located in the building, thinking he was a personal trainer. But then I remembered where I’d seen the uniform before: there is some sort of fitness institute nearby and I’ve seen many a youngster (okay, those in their early 20s) roaming about in the black uniform (which looks similar to the PT uniforms at the nearby gym). 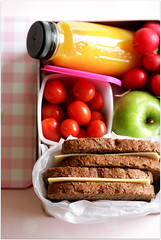 Meanwhile… all of that blithering finally leads me to my original point: the guy was carrying a lunchbox. Actually, that’s wrong. The term lunchbox doesn’t do the container weighing him down justice. He was carrying a large clear plastic box chock-full of food. Naturally I felt compelled to examine exactly what he had in there that deserved such a large home. I could see sandwiches. And a banana, and an apple. I think there was yoghurt – though it was hard to see without appearing too stalker-ish. And I could see a bottle of water. I suspect there were other things but… given what I saw, I suspect the other things weren’t Mars Bars and bags of chips. As a not-naturally-healthy eater myself a derisive ‘Hmph!’ popped into my head as I did a mental eye-roll at the too-good-to-be-true youngster. Then the banana sparked a memory from a few weeks back when I was at the Gold Coast to watch my niece in a pageant. An Australian Rules (Football) team was staying in the same hotel and each time we walked from the event room through the foyer and up in the lift, we came across any number of ridiculously fit-looking (and often cute, but young) footballers. And on nearly every bloody occasion they were eating bananas. No doubt stocking up for the big game that afternoon, but as a non-banana eater at the time I was thinking, WTF?

So as I tried to keep up with the fit trainer-in-training’s long strides I realised that he looks the way he does because of his lifestyle. He doesn’t just feign his interest in health and fitness. He’s not making a token effort of sorts. And it struck me – that it’s true what they say – that we are what we eat. And I was kinda relieved to see that this fitness-industry wannabe is, in fact, walking the talk. A lesson for us all.