I was stoked in late June to win a competition on the blog, Eating as a Path to Yoga. The giveaway was part of an interview with Jennifer Polle, a clinical hypnotherapist much respected by many US health / fitness bloggers I follow.

I’ve never been one to ‘diss’ meditation or hypnosis, but it’s never really worked for me. I’ve been to a couple of workshops at health retreats and listened to some guided meditations, but haven’t experienced the benefits I’d hoped for. However… despite that, I believe that there’s no harm in trying.

So, EVERY TIME I’ve attempted sleep since receiving the CD a few weeks ago, I’ve listened to it. I must confess to occasionally *ahem* often falling asleep before the end of it – and given my insomnia, that in itself is actually a good thing. But it means I’ve listened to the beginning so much I can almost repeat it verbatim. 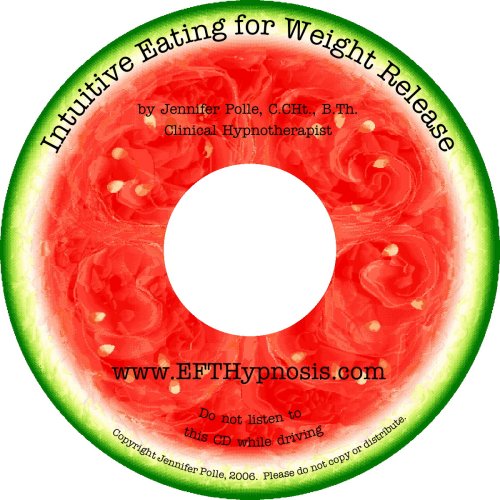 I like to think Jennifer’s voice is seeping into my unconscious and I will indeed succeed in intuitive eating; and only eat when I am hungry and until I am full while striving for a ‘size and shape that’s a healthiest fit’ for me. I like Jennifer’s attitude as she’s very ‘zen’ (hee hee) about meditation and doesn’t harp on about what one should and shouldn’t do.

However, I’ve discovered a sticking point and it’s one I’ve experienced before.

I cannot visualise myself or my body at my ideal weight. Jennifer’s guided meditation requests that we do this. Similarly one I tried (given to me by an eating disorder psychologist I saw in the late 1990s) suggested we do the same. Back then I would find that I could (sometimes) get myself into a state where I couldn’t really move – which I figured was as hypnotised as I was gonna get – but the lifestyle changes and habits suggested to me during the meditation never came to fruition.

I try. I picture a body in gym gear… a fit butt and lean strong legs encased in leggings and a short shirt or singlet top with toned arms and no bulging stomach or flabby floppy boobs. But as my mind moves upwards I cannot imagine it to be me. Given the fact that I have been many (many) weights over the last 20 years of adulthood, you’d think I’d have a ‘face’ of reference in my bag of tricks (aka my memories). But no. I can’t picture my face at-a-healthy-weight, and I can’t picture a body at-a-healthy-weight with my head on top of it. I’m thinking I may need to do some photoshopping to assist. (Although I may need a picture of the real me, which this obviously isn’t!)

I’m not a very visual person. I don’t get Pinterest, I don’t get photo-based blogging. But that’s just me. I love words. I love the sound of words. I’m always in awe of those who explain something in a diagram rather than a diatribe. My mind just doesn’t work like that.

I’m assuming this is the reason I can’t visualise me at a healthy weight. I’m assuming it’s this rather than some other strange psychological block that’s preventing the picture I’m trying to see.

Has anyone else come across this problem? Can you see yourself at your ideal weight (if you’re not there already)?
Do you think I need to achieve this visualisation for the meditation to be successful?