In an attempt to be a bit healthier, I’ve been trying to go alcohol-free during the week.  I don’t always succeed but when I have had several alcohol-free days running I feel my face looks a lot clearer, although I do find it harder to sleep (perhaps my mind gets numbed after a few red wines, allowing me to switch off more easily when my head hits the pillow).

But, what I have noticed is that – as a result of these alcohol-free days – I am behaving a bit like a 20yr old who binge drinks while out clubbing on weekends.   Obviously I don’t go clubbing and I am slightly more than double that age, but still… I find that I drink more than I should now on a Friday and Saturday night.  Perhaps forbidding it during the week is akin to strict dieting (and yet another manifestation of my black/white thinking!)… going without something makes it far more exciting!

Friday night wasn’t TOO bad, but last night, I had already had many red wines when I decided to open a new bootle.  It was about 11pm and I was (re) watching episodes of one of my favourite TV series, The West Wing.  Of course (having watched 4 episodes straight – interrupted briefly so I could perve at Richard Armitage in Spooks) I should have turned the television off and gone to bed.  But no, I was on a roll; talking myself into more wine and Aaron Sorkin cleverness. 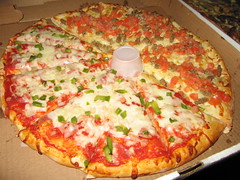 So, I sat and finished the bottle of wine, while scoffing Easter Eggs and three more episodes of The West Wing, finally going to bed at 2am.  Of course, the impact of my naughtiness would be contained to the one day if I didn’t wake with a slight hangover.  The late night and alcohol meant that I slept in until mid morning.  Suddenly my day was half-gone.  Although I wasn’t terribly hung over, I had that urge for fatty (stodgy) food.  So I got pizzas (note the ‘s’ at the end, cos one is never enough).  Eight or so pieces later (1000+ calories) I feel full and not really that much better.  I am reminded of the problem of overindulging in alcohol… it isn’t just the night itself which is affected, but the day after as well.  As it is, I have eaten a huge amount and the day has all but disappeared.  Shit!

I’d like to think I will remember this for next time.  But I know I won’t.  A similar thing happened just a few weekends ago.  And probably a few weekends before that.  Perhaps I need to do a longer stint alcohol-free, rather than just cutting back on ‘school nights’.  Even if I haven’t got my dieting or calorie counting under control, I’m not wasting empty calories on alcohol, it isn’t weakening my resolve, and I don’t have any morning-after-the-night-before issues.