Once upon a time there was a girl called Schmiet who was a morning person. Not one to dilly-dally about in the morning, she’d get up, dress, breakfast and be out of the door within a 20 minute period. By 7am she’d be on the coach-formerly-know-as -a-pumpkin to her workplace in the city along with all of the other early morning non-princesses and just half an hour later she’d be happily ensconced behind her desk bright-eyed and bushy-tailed ready for the day before her. Or something.

However… in recent times (and by that I mean the last year or so) the same non-princess has really struggled in the morning. Her alarm goes off and she keeps resetting it and resetting it. Until recently in fact, she’d settled into a routine of – though planning to rise early – actually crawling out of bed at 7.45am, to catch a 8.15am coach-that-was-a-pumpkin into the city, finally staggering into work at 9am. She justified this by telling all and sundry that the later coach-formerly-known-as-a-pumpkin isn’t as busy and she always gets a seat etc etc. And that’s true. In part. But… between you and me… the bigger issue is that frankly it just kills her to get out of bed. The End. (Okay, so not really… I’m just bored with the whole fairytale thing and tired of writing in third person!)

That’s changed over the past few weeks as I’ve been awake and rising early. It may be a temporary thing I realise, although of course it’s up to me to make it permanent. Sadly I’m not getting up early to exercise… No sirree. Nor have I planned to. Mostly I’m enjoying lunchtime gym classes, so don’t plan to exercise before work. Rather, at 6.30am each day I’m now drafting or tidying my daily blog posts. And it’s been great. With visits to my father straight after work every day, my evenings start a lot later than before and I was starting to get quite stressed by the lack of time I had (as I used to write / blog at night). But… early morning blogging has been much easier than I thought and… like exercising first thing…  it gives me a sense of accomplishment. And, in fact, I know what comes next may shock you, as I’m always such a misery-guts, but I’m feeling a bit like this…. 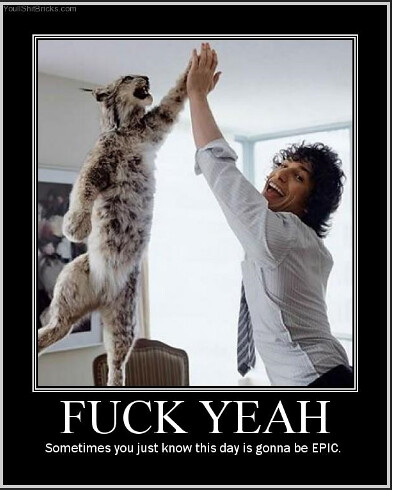 I know, I know… you’re terrified that I’ve suddenly found religion or been main-lining self-help books. Believe me, I am conscious of how negative I can be. I see it in others and know how frustrating it can be for those around them. Even constantly negative tweets from almost-complete strangers can be exhausting…. so I can only imagine how I am perceived sometimes.

It amazes me that it doesn’t take much for me to feel ‘in control’ of my world. Missing a couple of gym sessions last week (too busy for lunch breaks and evenings spent at the hospital) had me feeling very unsettled. So, this week I’m planning to cut back on my hospital visits (to every second day – although I feel guilty just writing that) so IF I can’t exercise at lunch, I will be able to do so early evening.

I’m not magically ‘better’ and I’m not going to do a ‘things I need to be grateful for’ post to remind myself that my life really isn’t that fucked. And, it may surprise you, but I do realise that, in fact, on the whole it isn’t fucked at all. 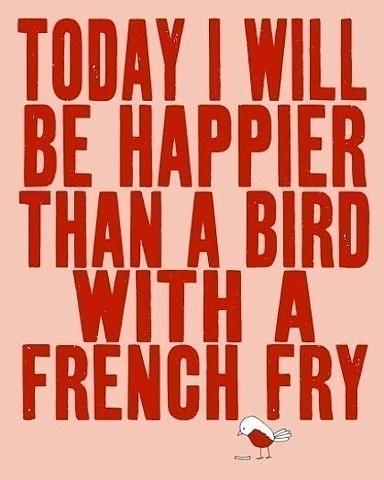 I can’t promise I’ll be like this tomorrow, but at this very moment in time… I’m feeling good. Great even. And do you know one of the reasons why? Not just because I’ve been eating healthily for the last few days and feel in control of my food; or that I’ve not imbibed in alcohol for a couple of days; or even that I had a good exercise session yesterday and have plans in place for today… but it was also this tweet (below) which I noticed as I was tossing and turning (feeling uncomfortable and irritable) in bed last night. It reminded me of my Full of Awesome post and others like it. This was all it took for me to smile and remember that all CAN BE, and mostly IS, well in the world.

Tomorrow when I wake up I’m gonna be awesome. #justsaying