Today marks our final weigh-in on the weight loss program that has diverted me over the past 12 weeks. Actually, this round of the program finishes this coming Sunday, which for me marks the 12 week anniversary of the day I first weighed in (then proceeded to eat a bag of caramello koalas for afternoon tea and 1kg of hot chips for dinner after getting on the scales). But today is the day we had to get weighed, take our measurements and do an ‘after’ photograph. All of this has to be uploaded onto our personal statistics page of our program’s website by midnight tonight. 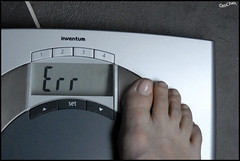 I have definitely surpassed my goals and expectations. Originally I hoped to lose 10kg in the 12 weeks. But after a month it became obvious that I was going to easily reach that, so I reassessed my goal and changed it to 15kg over the three months. I have definitely achieved that. But in true (competitive, obsessive, type A, over-achiever) me style, once I realised that was doable I decided that more would be good (naturally!). Initially I secretly hoped for 20kg, but that would have required big losses over the final weeks which probably isn’t possible unless you are in a TV show or training for hours a day (or at fat camp, where your calories are very limited AND you are training for hours a day!). So… over the past week or two, as I have headed into the low teens (and by that I mean 100+teens) my goal has been to get under 110kg.

Last week I weighed-in a day late and was 111.6, meaning I only needed to lose over 1.6kg this week to hit that target… which is (was) sort of do-able. But, I had wine on the weekend, and popcorn which took me slightly over calories on two days. I easily made up for it with a number of 900ish calorie days (rather than 1200) for the rest of the week. And… I have stepped up my exercise, commencing the Couch to 5km (C25k) program last Friday, and finishing week one on Monday and Tuesday after work. I even (ALSO) did Pilates Tuesday morning and then again today (thereby exercising at least once a day since last weigh-in); and I did no-carbs on Monday and Tuesday. So… all in all, it’s been an okay week.

I got on the scales last night and had already lost about 1kg. So, I was hopeful that this morning I would have dropped another half a kilo or so to hit, or slip below, the 110kg mark. But alas…. I jumped onto the scales this morning before pilates (and by that I mean I tentatively stuck a toe onto the scales before gingerly stepping on) to discover I was 110.4. Shit!!! Only a couple of hundred grams less than last night and missing my goal (with a loss of 1.2kg in the past week). Of course I’ve told myself I’ll check again when I get home, in case I was retaining fluid or something. Excuses, excuses….

The saner part of me has, all week, been trying to talk myself down from the ledge. I have been completely obsessed with this morning’s weigh-in. My conversations and emails to my parents have centered around “Oh no, what if I am not under 110kg by Wednesday, but get there by Thursday, or Friday? It’ll be too late!” Can I just say that even I know that someone needs to slap me around the head and say “WHAT THE FUCK?!” I seriously do realise that – just because we have to record our results today DOES NOT mean that subsequent weight loss doesn’t count! Any weight loss is obviously excellent (I need to repeat it in the form of a mantra). 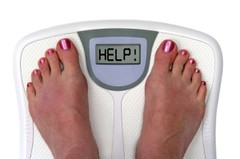 The increasing stress over the event (ie. weighing-in) has been a confronting one for me. It’s made me realise that I still really really focus on the numbers more than I should. As I was despondently driving to pilates at 6.30am this morning I tried to remind myself that it was in fact 6.30 in the frigging morning, I was incredibly tired and yet, I was going to pilates. Earlier this week I’d realised I had to have tomorrow as my rest day and therefore needed to exercise today and had booked into a class so I couldn’t pull out of it. What an achievement for fuck’s sake! Before this program I’d completely stopped doing any exercise INCLUDING pilates. Yet here I was, up at the crack of dawn, having gymmed two days in a row and about to do my second pilates class in two days.

I’ve lost 18.7kg and 52cm from bits of my body in 12 weeks; hell, less than 12 weeks! That is fucking huge! I don’t know if I can even lift 18.7kg, let alone carry it around every day! Most people would be happy with that. Others on the program probably would be…. but’s it’s all relative I guess. When I started I certainly didn’t think I would do this well. I don’t know why I’m so obsessed with today’s deadline to record our results. It is unlikely I will be in the running for one of the weight loss prizes and I haven’t even done the required fitness tests which I think are a requirement…. but there’s something ‘exam-like’ about having to meet the deadline and report back – hence the performance anxiety.

Surely more important for me is that I DO keep losing weight and don’t think that today’s weigh-in brings an end to my ‘journey’. On many levels I certainly don’t feel like the program is over (and by that I don’t just mean that it officially finishes Sunday) as I’m already giving my attention to the next round which starts in about a month. I’ve got a long way to go yet. Today’s ‘after’ photo certainly demonstrates that to me. But nevertheless I still need to find a balance so I can celebrate my achievements to date but try to mentally lighten-up a bit as well. That’s the thing that has been evident to me this week: not only have I got a long way to go physically to become the person I want to be; but my mindset still needs a lot of work as well.