I’ve often talked about the dire relationship I have with the voice of doom or scales of judgement. I’ve also however, talked about the fact that I realise the bathroom scale is a bloody inanimate object not worthy of such dread (and *ahem* revere – in equal parts!).

Because I’d stopped ‘dieting’ and weighing myself I threw away my old bathroom scale during my seachange 18 months ago.

However – unlike some people who quit dieting and become mindful and intuitive eaters before magically (albeit eventually) losing weight – that wasn’t the case for me and my realtively-recent 20ishkg weight gain is well-documented.

When I started Weight Watchers I had no choice but to get weighed. With some regularity. As it happens, I’d much prefer to not have to get on the scale once a week but – alas…

Initially I decided against getting my own bathroom scale and just visited my mother (who lives about 50km away) to use hers. However, it was a struggle to get there on the same day each week and within a month I realised I needed to bite the bullet and find an alternative. I considered options like public scales at local shopping centres, or using a friend’s but as my mother had been planning to get a new set she offered me hers (with which I now had a relationship of sorts). And I happily accepted. 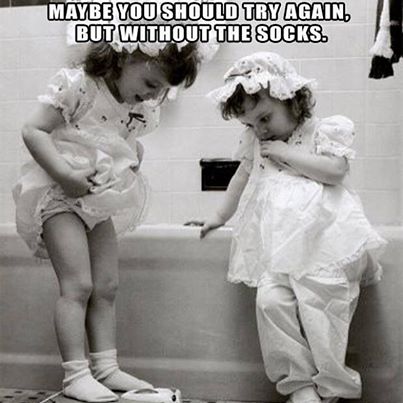 Pic from a gazillion FB pages.

However, they’ve become increasingly unstable. I did wonder if I was too close to the maximum weight level, causing them to struggle with accuracy but my mum recently tested them and fortunately they were just as variable for her.

I’ve since tried new batteries to no avail.

It’s a bit like The Biggest Loser – where the faux scale we see at judging is programmed to jump around markedly before settling on the correct weight. You know what I mean. Poor Alice gets on and the readings start leaping about: 157; 98; 132; 89…. before finally settling on somewhere in between.

Mine isn’t quite that bad, but almost. I tend to take solace in the fact that the range keeps peaking at a lower point – nevertheless, I’m forced most weeks to take an ‘average’.

You’d think this would actually be a bad thing, but I have to confess I kinda like it. Given my long history with the numbers on the scale and tendency for specificity, I’m glad I can approximate my weight. Of course, the fact that I’m on there at least once every day means that finding an average is pretty easy.

I vowed I wouldn’t weigh more than once a week but can’t help myself. Are you as bad?
Is your bathroom scale precise?