A couple of days ago I wrote about the decision before me – whether to try IVF despite some bad news regarding hormone levels and my chances of success given that and my age. I talked about the decision I had to make: try anyway; or not. The former takes the outcome out of my hands – ‘at least I’ve done everything I can…‘ – but prolongs the waiting and stress. Of course it will also cost me thousands and thousands (and thousands) of dollars – though that isn’t the point because the end result is – of course – ‘priceless’.

Not trying, I postured in the previous post, means that I may blame myself in the future and have to live with the regret. Although I have tried to get pregnant previously through other assisted means (including fertility drugs etc), it wasn’t as invasive, or as drastic. But the good thing (as well as the bad thing) about not trying is that I am the one in control of my destiny, of my future. It is my decision. Well, sort of.

Surprisingly, writing those words the other day has empowered me a little. Whereas before I was feeling like a victim, I now feel a bit less so if that makes sense. That isn’t to say that I won’t still resent those with partners and kids – when I have longed for both. I am meeting my best friend (here from NZ) on Saturday and I am petrified she will tell me she is pregnant. I don’t think she will mind me saying she isn’t an overly maternal type – having been raised with much-younger siblings. I honestly don’t know how I will react to such news. And NOW when everything in my life is so fucked (okay, that is a slight exaggeration). 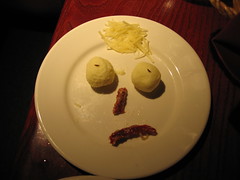 So, if it isn’t obvious I am thinking of not going through with the IVF treatment (shit, I sure sound definite in my decision don’t I?!). By making this decision I am not prolonging the agony of wondering; of hoping and dreaming. I am drawing a line in the sand and now have to seriously start thinking of my future. With just me in it.