Yesterday I did a rare and amazing thing. I ate lunch. Now I know that the mere fact of eating lunch isn’t that spectacular. Unless of course you live in some poverty-stricken under-developed country… which I don’t. No, what is a amazing is the full stop that came after the ‘I ate lunch’ phrase. Because I ate lunch while doing NOTHING else.

It’s something I never do. I eat breakfast as I’m checking my emails (or in the bath/getting dressed if I’ve been exercising and have a limited time before I catch the train). I eat my lunch at my desk – while taking a break to surf the internet news or finish a blog post. I eat dinner (and anything else) while watching television.

After stuffing about on the internet all morning yesterday I finally got around the eating my breakfast (which became brunch, which became lunch) at about midday: a magnificant feast of scrambled eggs on toast. And, as it was now two meals I was allowed to have 2 eggs scrambled with light evaporated milk, seasoning and 2 pieces of low GI gluten free bread. Woo hoo! Walkin’ on the wild side! After slaving away over the microwave and toaster for all of 10 minutes I grabbed my water bottle and plate full of fluffy goodness and headed to my big armchair (where I spend much of most nights and weekends). In my little mind I was already thinking about what I had TiVo’d to watch. Hmmm, I thought, will it be No Ordinary Family; Outcasts; Downton Abbey; Big Bang Theory; or…. But then I was struck by a spectacularly original thought: Why don’t I sit and eat at the table while doing nothing else? Hmmm… why not? Why not indeed?

So I did. I will admit to flicking through a brochure which was sitting next to me, but (essentially), I sat and I ate. And that’s it. It still didn’t take long for me to hoover up the meal, but at least I remembered doing it. Like so many other regular dieters, I’ve read (and heard) that one should concentrate on what one is eating, rather than eating mindlessly in front of television, or while reading; and that one should focus on each mouthful, appreciating each morsel. I’ve never been one for that.

I did however, grow up eating at a table with family. Even when my mother worked nights, my father would cook dinner for my brother and I and the three of us ate together. On special occasions we had roast dinners; and hamburgers or hot chips as treat meals on a Sunday. But always at the table and always together. Breakfast was the only meal we didn’t eat as a family (with different schedules) but we were still expected to eat at the table. Even now that it’s just the two of them, my parents eat at the dining table every meal, only having their pre-bed cup of tea in the lounge room in front of the television. 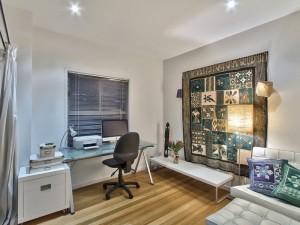 As I’ve lived alone most of my adult life, I rarely sit at a table to eat. I’ve always eaten in front of the television. Indeed in my current apartment, even though I have 3 bedrooms (ie. one spare plus one study), I’ve converted what-could-be-my-dining room into a study. I have a bench table in the kitchen that I use when my parents visit (though also have a deck and table outside), but I no longer have an actual dining table. I eat in front of the television. Every night. I do know better. Really I do! In fact, oOe of the reasons I had the kitchen bench custom made was so that I could sit there and eat (while still watching TV – as a concession) rather than having to put everything in a bowl to eat one-handed in front of television (while holding the bowl with the other). But I never use it when it’s just me. Aside from today that is.

It isn’t that I have a problem eating alone, or setting up the table for one. I’m very certainly used to it. It isn’t the sitting by myself at a dining room table that is the issue. It’s more the ‘doing nothing’ that I find hard.

Six or seven years ago I was seeing a psychologist who specialised in eating disorders and we discussed this very issue. She was anti-dieting and was a big proponent of Rick Kausman’s If Not Dieting, Then What? book. When I started seeing her, I’d done a stint at Weight Watchers and lost over 20kg. I got stuck at about 90kg and was yo-yoing up and down – though just a little. I knew that my thinking and behaviour around food was not normal and that I needed to act on it. I’d seen a few therapists before, but none had really done me any good. At the time, this psychologist (Elizabeth) was quite helpful. I later stopped going because it became logistically difficult and have always regretted that I didn’t continue (and I don’t believe she still practices).

I’ve mentioned before (many times) that I’ve gone through fetishes for a certain food which I will eat endlessly. I talked about my coco pop, milo and hundreds and thousands thing the other day. There have been corn chips, lolly cigars, hot chips etc. And, when NOT trying to diet it isn’t like I will eat these things as a treat. I will – in fact – eat them daily. Often more than that. Every meal and in between if given a choice. 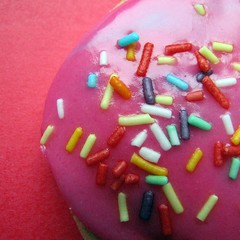 Perfect, but with chocolate icing!

A recurring fetish over the years has been Milk Arrowroot biscuits smothered in very thick chocolate icing (made with cocoa powder, icing sugar, water and butter) and hundreds and thousands (or those little stick things). When I was very little I think they were a special treat: when icing a cake if there was ever any icing left, I would eat it on what I called the ‘footy’ biscuits. Then it became a regular habit. I can still remember going to a particularly gruelling senior women’s basketball rep training session one night, having consumed icing on biscuits for afternoon tea. The coach made us do so many suicide runs (wind sprints / shuttle runs) that I started vomiting. Up came the icing on biscuits. I was 15 years old at the time, so I still remember it 28 years later. But it didn’t turn me off them.

At the time I was seeing Elizabeth (pre-coeliac diagnosis obviously cos I can’t eat footy biscuits now) I was going through an icing on biscuit stage. I was eating them every night. And more on weekends. And usually I ate them in front of television. Part of the ceremony (you see) is that I have to be watching something good on TV. It doesn’t work if I am channel flicking. And it is exactly the same now. Back then though, Elizabeth was trying to break that food/television/binge nexus. She asked me to change my ceremonial eating pattern. She was happy for me to continue with my icing on biscuit habit (which I was clinging to with a vice-like grip), but she wanted me to do it at the dining room table. And dress for the occasion; really make a big deal out of it.

I suspect it was about making me more conscious of what I was doing and what I was eating, rather than shovelling the food in with no awareness. I must admit, though, that I never did it. I didn’t ever sit at my dining room table with my milk arrowroot biscuits, my bowl of icing and container of hundreds and thousands. And now, many years of binge-eating later, I’m wondering in retrospect – if maybe I should have….

Maybe it isn’t too late, and I can start by dining at a table more than once in a decade and in front of the television less! Ah-ha! Found my next goal.