I said I’d do it and I did! Ta da! I joined a gym! While you pick yourselves up off the ground I should put some qualifiers in place.

I did mention in the previous post that the gym I’m joining isn’t part of the large chains of gyms across the country. It’s not even a large suburban gym, though nor is it the type you find in 4 star hotels or apartment buildings with three pieces of equipment, one set of dumbbells and a flat fitball.

In fact, as I said in the earlier post, I’m joining this gym – not because it’s cheap (although it is at $50/month) – but because it’s handily located under the building next to mine at work. The gym in question is a Brisbane City Council Wellness Centre, set up ONLY for staff of Council or those tenants on the same premises: which is how I get to go.  The gym itself is pretty small. I only saw a few of each piece of cardio equipment (treadmills, bikes, cross-trainers etc). But there are free weights and weights machines, plus a small aerobic room. The times of the classes aren’t great (mostly at lunch) but I figure even getting to one class a week would be a good thing. At this stage I’m hoping to get to a couple (and am particularly interested in the faux Body Jam – aka ‘Move & Groove’ and Pump, known there as ‘Powerbar’ which sounds like something weightlifters would eat!). In addition it hosts boxing circuits, pilates, yoga, Zumba etc. 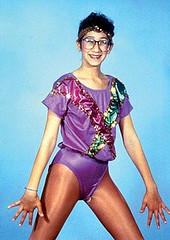 My biggest struggle at the moment is finding the time to exercise. In reality I know that’s just an excuse. There are 24 hours in a day. I’m at work for 9 or so. I commute for 1-1.5hrs. I sleep for 6-8hrs. It doesn’t take a genius to work out that there are still some spare hours there. If I’m really honest, I’m actually struggling to get up early at the moment, so have to exercise at the end of the day. And frankly, by the time I’m home at 6.30pm I’m loath to have to do any. But I do. I just fucking do it (the JFDI mantra of my program). It does however mean that I’m bathing after 7.30, cooking after 8pm and eating as late as 9-9.30pm.

Plus, once home at the end of the day I really don’t want to do anything other than sit mindlessly in the bath with a book or in front of the television (or – drafting the next day’s blog post) so there’s always the temptation to give it a miss. Anyone who follows me on Twitter knows that I send several whining tweets before I’m able to force myself onto my exercise bike or out for a walk once home at the end of the day.

So… my plan is to incorporate exercise into my working day – either before or after work or – ideally – at lunchtime. Sure, it probably means I’m getting home even later and my night is still starting later than I’d like but hopefully it gives me less of an excuse NOT to do something. And… more importantly it adds some flexibility to my program and gives me some variety.

I had my fitness assessment yesterday. Now, it is a while since I joined a gym (rather than going casually which is what I’ve done when I exercised more recently) but I was impressed by the thoroughness of my assessment. When I went to have a look at the gym I was surprised to see three young (though anyone under 30 is young to me!) fit looking things in uniform. Ruby*, who showed me around last week was my assessor. I’d had a lengthy form to complete beforehand with my medical history, exercise habits, dietary habits, goals and answers to the meaning of life which I dutifully handed over on arrival. We chatted about the brilliance of my answers for a while before I climbed aboard the scales, had my measurements done and blood pressure checked.

I then had a fitness assessment thingy which required me to wear a heart rate monitor and ride an exercise bike. I must add at this point that because I already have a (constantly) sore bum from my exercise bike, the experience wasn’t pleasant. Not that riding for 10 minutes at three different speeds was aerobically challenging, but the seat was so bloody hard my sitz bones were in agony. I will never complain about the very large soft seat on my rented exercise bike ever again. I swear. (Okay, that may not be true, but I’ll try to remember that it COULD be worse and continue to be relieved I ordered the bike with the big seat!)

Amazingly my fitness is ‘average’. To the gym bunnies or runners out there, that may not be terribly impressive, but for me who wasn’t even walking 11 weeks ago, it is very exciting. (Having said that I only JUST made it into the average category… but things can only look up – surely.)

Finally after a flexibility test (the only thing in which I achieved an ‘excellent’ result) I was done. Ruby decided against the skin fold test (or some body fat thing) and suggested we do that down the track. During the course of the appointment we’d discussed my injury issues (hip flexors, hip etc) and I was relieved that Ruby seemed very knowledgable about it all. So far the staff have really impressed me, but I guess the place has been set up for Council staff, so the organisation has a responsibility to give them quality and professional services.

Ruby is developing a program for me with some stuff included to help my hip etc, though I’m really more keen to do some classes and use the cardio equipment. Today will be my first visit as a fully fledged member. I am AIMING to start the Couch to 5km (C25k) program and downloaded an iPhone application recommended to me last night. So, I am all prepared. It’s Friday today so I’m planning to head off right on 5pm and hope that other members are at the pub (where all good employees should be at 5pm on a Friday) and I get to use the treadmill. If it all pans out I expect to be making my way home red-faced but chuffed sometime after that.

Note that the best thing about the entire fitness assessment though was when Ruby got to the ‘age’ part of the forms. Rather than check what I’d written, her pen hovered over the age categories…. ’20 to 30?’ she said to me. God bless her. I guess when you are 15yrs old, everyone over 20 looks the same. ‘Ummm…. 43,” I had to say to her. Though perhaps I should have lied. (And perhaps she was just trying to make me feel better!)

*Name changed to protect the innocent