I was responding to a comment on my blog yesterday when it occurred to me that one of the reasons I’m suffering some motivational problems (in terms of weight loss and exercise) is in fact one I’ve experienced before.

And no, I’m not talking about my love of chocolate, corn chips and alcohol, or even my general apathy… I’m talking about the fact that I’ve become a tad smug.

Now people who know me would be shocked to hear me describe myself in that way. Just yesterday I was chastised a couple of times for minimising my chances of getting a job and commenting on myself negatively; but, while I’m not saying I think I’m the best thing since sliced bread (is that just an Australian colloquialism?) I’ve realised I dislike myself less than I used to.

I should note that I had initially written ‘despise’ rather than ‘dislike’ the previous sentence, but changed it lest people think I’m being overly critical of myself.

Although I’d like to be a more confident person, I abhor vanity, so I’m unlikely to go too far on the self-congratulations front. But, even I know I’m prone to self-deprecation, so in many ways despise isn’t too strong a word to describe how I’ve often felt about myself. However I should note that ,while I’m critical of a number of aspects of my personality, it is predominantly the physical ‘me’ (and the behaviour which has led to it) which has borne the brunt of my self-disgust.

I don’t believe I’m unlovable (for example), but I can’t imagine why anyone would be ‘in love’ with me, or physically attracted to me. At all. And, I’m not being coy or victim-like when I say that. I can’t imagine being attracted to someone VERY overweight, so why would anyone feel like that about me?

Obviously there is a direct correlation between my level of self-hatred and my weight. Like anyone and everyone, I feel SO much better about myself when I’ve lost some weight.

And therein lies my current problem. I’ve mentioned before that several of my diets (oops, sorry… healthy lifestyles) have gone awry once I’ve lost some weight BUT before I reach my goal weight: I lose some weight and start to feel a little better about myself and – it seems – my weight-loss motivation wanes. 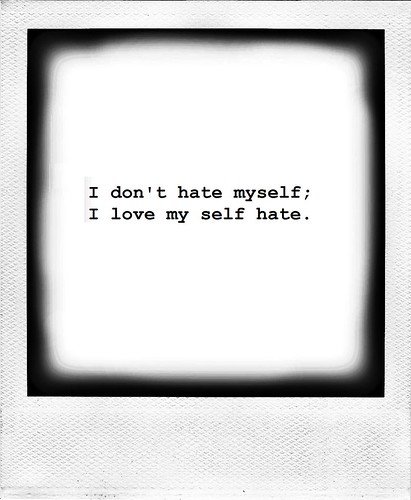 When I’ve lost weight (as I have done recently), although I’m not likely to prance about in skimpy clothing primping and preening, I do feel more confident in whatever I’m wearing; I feel better about myself; and probably act a little differently as well. I’m less prone to shame or embarrassment about my body and my weight (and presumably my ‘weak-will’ which has led me there). I feel less judged and less ‘pathetic’. All of those things I’ve written about before…. all of those things I think about other bigger people – are alleviated. Just a little.

I’ve never been good at perceiving what I look like. I’ve previously claimed to have that body dysmorphic disorder… though mostly in reverse – I’ve never realised how big I actually am / have been, which means I cannot really tell what I look like now or how I have changed. My view of myself is entirely reflected by those around me. Lately I’ve been constantly receiving comments about the weight I’ve lost… which isn’t helping keep me ‘hungry’ or motivated. Instead I feel a little smug. But… I am still 20-30kg OVER my ideal weight so I have a long (long, long) way to go.

I don’t want to go back to where I was (when I’d stress about making myself as ‘small’ as possible on the train seat so fellow commuters didn’t cringe at having to wedge in next to me or live only in overly baggy clothing akin to maternity smocks and mumus!), but I need to get past this ‘Look what I’ve achieved?’ mentality. Note to self: I need a reality check.