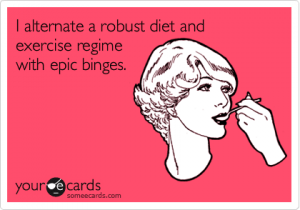 I went to Zumba as usual on Monday. And loved it. As usual. We did THREE new dances. I actually felt a bit stuffed, so for the first time ever I was keen for the class to finish earlier than scheduled, which NEVER happens – and made me worry that my fitness is deteriorating a little now that I’ve had to drop a couple of the more challenging cardiovascular classes!

On Tuesday I attended the Pump (weights) class. Yep, so far so good.

On recent Wednesdays I’ve been doubling up. I’ve been going to a lunchtime Hip Hop class (actually called ‘Move and Groove’ at my gym). On a few occasions there’s just two of us there and on those days the class is HARD cos the instructor just dances and we copy (as well as we can – cos we actually look nothing like the instructor, MJ). When the class has more participants it’s a bit slower as some of the others aren’t terribly coordinated and struggle with a lot of steps. Anyway, I usually do that class and a post-work class which has lately been a circuit type class, but focussing on strength work.

HOWEVER, this past Wednesday I had an early start… so I was in the office by 7.30am. Then mid morning I received an email from the gym (on site) advising that MJ – our Hip Hop instructor – was ill…. so the class was being cancelled. I was a tad pissed off, because it also meant I wouldn’t take a lunch break and just work through; making it a LONG day. But, I did still intend to go to the post-work class. I’d driven in so I didn’t need to worry about stinking a train-load of people out after the class as I returned home. But… as the day progressed I yawned more and more. And – in the end, rather than stay for the class, I actually left work a bit early, beating the afternoon traffic and thereby avoiding doing ANY exercise all day. 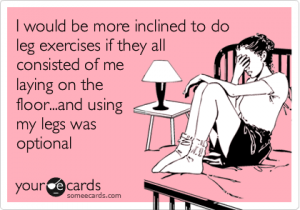 On Thursday I did my usual lunchtime pilates class AND then – in a vague attempt to make up for Wednesday’s slackness – I went into the gym and did a 20min interval session on the exercise bike. I had to get back to work so couldn’t skive off any longer than that.

As I no longer work Fridays I’ve been using the double class on Wednesdays to round out my five days of exercise a week. Occasionally something comes up (a public holiday or a work commitment) and I miss a class, but I’ve been pretty good in  doing something on a weekend to make up for it. Even a walk. (Well… usually a walk!)

However, despite my plans to do something on Friday, Saturday or Sunday – I did nothing. SFA, in fact.

The fact that I’m confessing it here means I’m obviously feeling slightly guilty. I know that one week of slackness isn’t gonna kill me. And I know that what I put IN my body is far more important that exercise at this point in time (so too much mashed potato or ravioli is far more detrimental to weight loss than skipping a session at the gym!), but it doesn’t prevent the gnawing feeling of failure permeating my Sunday afternoon and evening. Obviously, the thing to have done – rather than sit around wallowing – would have been to even go for a 10 minute walk. SOMETHING is better than NOTHING. But I didn’t. 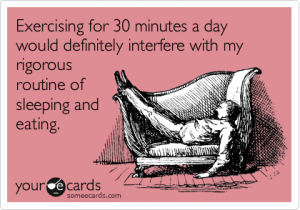 It’s okay, as I know all is not lost. This week I’ll do my usual classes and hopefully double up on the Wednesday. In some ways it’s good that I’m not comfortable with a too-lax attitude about my exercise; but the guilt doesn’t do me much good and causes me to sulk more than is healthy.

And bizarrely, THAT’S the thing I’m most frustrated with: the guilt; rather than the fact that I skipped a day of exercise! Which I actually think is progress as I’m starting to recognise what a pointless emotion it is.

And I’m sure others must occasionally have slack weeks. Surely.

Do you feel guilty when you miss a session or two you’d intended to do?

PS. Special Monday update… today’s Photo-a-day June challenge theme is ‘Something cute’. As I was unlikely to see any children and loath to wander up to a cute stranger (although there is this guy I see on my train occasionally….); I asked my fave gym instructor if I could get a photo. I explained that I talk about her classes a lot in this blog and would love to put a face to the name. So… we did a post-class photo (of her, not me – I was BEYOND fluorescent red!). So…. here’s the oft-mentioned fabulous faux-Zumba instructor, Nikki! 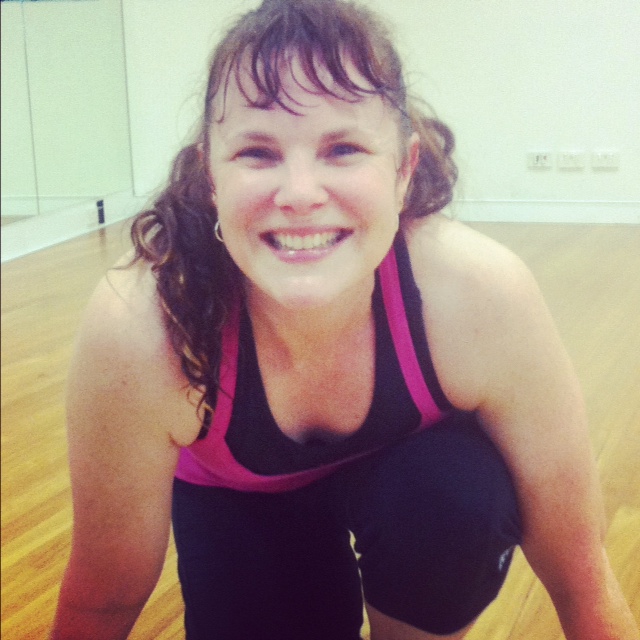