I’ve finally read the book. 50 Shades of Grey, that is. I won’t talk about what I thought of it here and haven’t decided if I’ll do that in my Debbish blog, cos it’s hard to think of something to say which hasn’t yet been said (**update** of course I bloody wrote about it. I cannot help myself!).

So, this post isn’t about a charismatic wealthy man and the virginal (though mouthy) ingenue – and yes, 50 Shades of Grey does sound like a 1980s Mills and Boon novel and yes, it’s been done before. Girl thinks she can tame (and change) bad boy. As I’ve only read the first of the three novels I’m yet to know – but would be very surprised – if she’s able to do it. Leopards, spots and all that.

Rather, this post is about moderation. It’s about moving away from all / nothing and black / white thinking. It’s about shades of grey. 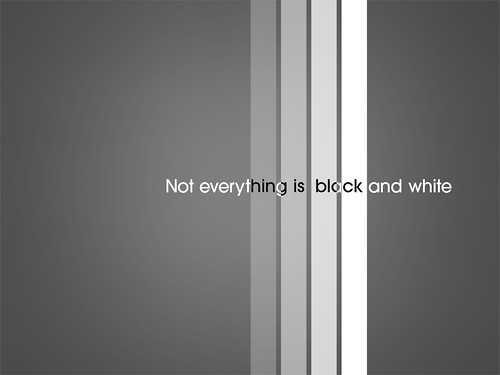 I’ve confessed many (many MANY) times to my all or nothing approach to… well, everything. But, I’m starting to think that’s changing.

I don’t feel I’ve had a huge number of successes lately. There have been some positives: my exercise had been going well; and by not-dieting, I hadn’t been bingeing. However (there always being a flip-side), my non-dieting approach has meant my weight has actually increased a little.

Regular readers of this blog will know that I’ve mostly been working on my mindset over recent months – trying to find some sustainable approach to live an enjoyable life WHILE maintaining the weight I’ve lost and losing more.

But… in the last few weeks I’ve noticed an unexpected change. Firstly it started with having stitches after getting something cut out of my back. I tried to continue exercising but exacerbated the healing and caused an infection. I sat down to write a post, wallowing in self-pity and guilt at my inability to exercise for a week or so. But… after the words started flowing I realised that I actually wasn’t that worried. In fact, I felt pretty confident that I’d be back into my exercise regime in no time. (Little did I know I’d then be struck down with a cold/flu – but that’s another story.)

The lack of exercise, some uncertainty in my working life and (what ended up being) THAT time of the month meant that this time last week I wrote that I was feeling very ‘meh’, for the want of a better word AND I ended up bingeing after two months of avoiding my danger foods.

Naturally I felt compelled to confess all here. But again I was surprised. Sure, I regretted my choices, but instead of being racked with guilt I was prepared to shrug off the binge, learning from my decision rather than castigating myself for it. In some ways, rather than being numb throughout the process it was almost as if I was watching it happen; watching the decisions I was making and shaking my head in exasperation but not berating myself for my weakness.

After these recent posts I received lovely supportive comments. And it was when responding that I was able to acknowledge that PERHAPS my black / white thinking was (in fact) dissipating; perhaps I was becoming more moderate in my approach to my health, exercise, dieting and life in general.

I know that’s not going to necessarily help me lose weight and reach a healthy size and shape, BUT I like to think it means I’m continuing to evolve in some way.

I know that I tend to spend a lot of time navel-gazing with little personal growth to show for it. I generally know what I SHOULD be doing and thinking, but I’m rarely able to walk the talk. But… this shift in my thinking that I’m starting to notice surely means I’m not a lost cause. There is hope for me. Yet.

Are you a black/white thinker; or can you see shades of grey?