I have a problem… (well, okay I actually have many, but this post is about one in particular): I think I’ve lost my exercise mojo.

It’s been a long (LONG time) since I’ve been super-fit, but even just six weeks ago I had a good little routine going. In fact, I (occasionally) worried that four gym sessions a week were insufficient or that I should be pushing myself more; but was mostly happy with my regime given my history which ranges from anorexia and over-exercising; to obesity and no exercise.

Nowadays I’m more into group fitness classes than exercising alone. A year ago I joined a gym after a long not-exercising hiatus and the gym in question was everything I believe one should be: it was handy (to work or home – work in my case); it had classes that interested me (Zumba, Pump classes and so forth); AND it was cheap.

I wanted to develop a sustainable fitness program: something that I enjoyed and would commit to doing with minimal angst. In retrospect, I realise that I needed a routine. Each day at work, a little diary reminder would pop up on my screen around lunchtime: “Zumba in 15 minutes,” it would tell me. And I’d grab my stuff and head downstairs. Exercise and the gym had become part of my life.

I lost access to the gym when I finished work about six weeks ago but in my new more zen-like approach to life I decided to cut myself some slack while I packed and moved. And then I became sick with bronchitis in the midst of the move and was incapable of ANY exercise. But still…. the new zen-like me (?!?!) was mostly fine about my housebound and bedridden state.

“No worries,” I thought, “It’s spring here and I’ll soon be up early walking along the beachfront every day.”

I also planned to join a gym on commencement of my new life. “All will soon be well in the world,” I told myself. In fact I even did some research and decided on the gym I was keen to join.

And yet… here I am: just over a week into my new life. I’m (mostly) unpacked. But, unfortunately I’m not (*ahem*) leaping out of bed and enthusiastically walking along the esplanade at the crack of dawn each morning as planned.

I have been on a few walks, but it’s been a struggle. And as for the gym… I sent off a tentative query but little else.

In my last post I talked about the pressure I was putting on myself to look to the future. It was also about starting my ‘new life’ and expectations I had.

Being hamstrung about my professional future is one thing, but I can’t understand my antipathy towards the gym. I LOVED my Pump (weights) and dance classes at my old gym. I never thought twice about going. And yet… here I am. Delaying the inevitable.

I’ve been single my entire adult life, so turning up to things alone isn’t a problem. So while I’d like to blame shyness (a problem for some when starting something new), sadly I cannot.

Perhaps I’m slightly apprehensive about starting from scratch: having to suss out the best instructors, get to know the staff and so forth. I must confess I AM somewhat embarrassed that my fitness will have suffered a lot over these past couple of months and I’m less-fit than I’ve been over the last year.  And because I worry so much about what people think I suspect I’ll feel the need to justify my lack of fitness to others. (They’ll roll their eyes and think, “Sure you used to be fitter…..”) 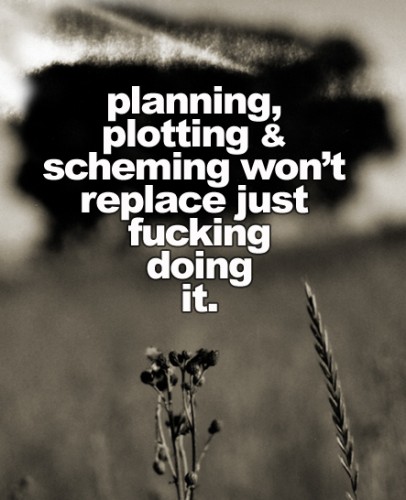 Or perhaps I’m just being apathetic and lazy. Quite frankly, it’s easy to just sit back and keep plotting and planning and defer the doing. (Long term followers of my blog will recall this lovely quote – to the right!)

I do know I need to bite the bullet and just GO to a class (god-dammit!). I’m sure once I’m there (although I may be huffing and puffing) it’ll be like riding a bike and I’ll wonder why it took me so long to get back there. But… somehow I first need to find the strength to get off my butt, re-pop that gym-going cherry and rediscover my exercise mojo.

Has anyone else experienced anything similar?
Any suggestions to get myself there? (Other than JUST F*CKING DO IT?!!)