I mentioned about a week ago that I am cat-sitting at my brother’s place across town for a fortnight while they holiday o/s. I don’t venture back to my place while here, though we don’t live THAT far apart.  I am on the inner south east of the city and they are inner west. Although (in my earlier post) I listed the things I like and don’t like about being here, I realise I missed one of the more challenging aspects to being here.

My brother and sister-in-law married over 20 years ago. They met at University and dated for some time before marrying. My (only) niece will be 15 later this year. Although they are 3-4 years older than me, we were all at University together (we all lived in the same residential college on campus). They were both stellar students, whereas I was…. not. I hated the subject of my first degree, so in my second year, I stopped going to lectures and failed. As I had always been a good student (for someone who put little effort in) this was a shock for me and my family. I deferred University for a year or two before going back to finish my undergraduate degree.  I was only 21 at the time but going back to University after a year or two in the workforce was difficult. Given the plethora of mature-aged students on campus, it wasn’t that I felt old. No, that wasn’t it.  It was because I felt that I didn’t belong. I felt like a fraud. And every day walking around campus I was reminded of who I had been and who I had become.

Perhaps I’d always felt unworthy, I can’t remember now what I felt arriving in my State’s capital city to start University only a month after my 17th birthday. In fact, I was in the throes of an ongoing battle with anorexia nervosa at the time (supposedly in recovery at 50-53kgs and 178cm tall), so I suspect I was pretty much numb. In fact what I remember most from those days relates to food and exercise – which ruled my life. I played a myriad of sports at my residential college and in local fixtures. And I exercised obsessively in my dorm room. Oh, and I barely ate. But it was in my first year of University that my recovery began. (To the extent that it ever did!)

I started gaining weight. I had a slight freak-out early in the year and still recall a meltdown I had with my mother. Our college was having its first ball of the year and I told her that (in my student ID photo) I looked like a 12 year old boy. I still remember the conversation to this day. Slowly I started gaining weight. Accidentally rather than deliberately. That is also when the bulimia started. I should have sought help back then, but didn’t. I ploughed on.  I gained weight and kept gaining. Like those mice that don’t know when to stop eating.

I was nowhere near this size (in fact nearly 40kgs less than I am now and I would KILL to be 87kgs at this point in time!) when I returned to University in 1990 but I was overweight. I joined Weight Watchers for the first time after a year or so and lost about 12kgs, reaching 75kgs before finishing University and moving. (And putting that and more weight on.)

So… I obviously got through the undergraduate degree and then I left the University behind me. My brother and sister-in-law had settled on the east side of town and so I wasn’t reminded of the painful years of my late youth. 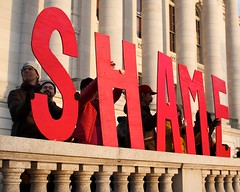 Until about 10 years ago when my brother and sister-in-law decided to move back across town, close to our old University. Driving to visit them I was constantly jolted back 20+years as I passed by old haunts and familiar landscapes. Initially it stressed me out. A lot. I found it really hard. Really really hard.

I eventually worked out that it was (is) of course, for the same reason I find it hard to leave the house when I visit my hometown. I wrote about it here when I was there last year. I am ashamed and embarrassed and – well frankly disappointed – at who and what I have become.

I’d like to think I am on the precipice of change, but I’ve thought this again and again. And, what I cannot help but wonder is, how can someone dislike (hate?) themselves so much and yet not be driven to do something about it?