As I continue to struggle with self-acceptance (self-love and similarly wanky notions – joking… though I do concede that it’s a bit trendy to talk about self-acceptance at the moment!) there’s one aspect that alludes me.

My not-dieting approach and increased happiness with my life means my ‘self-loathing’ is diminishing and with that my anger and urge to stuff myself with food. I’m not saying it’s gone, it’s just watching from the wings… waiting to see if the show can continue without it.

However, I’m still incredibly self-conscious about my body. I recently permitted a ‘selfie’ photo which featured my entire face but there is no way in hell I would allow a picture of my whole body be put out there for the world to see.

I do remember writing a post just last year about the fact that it was wrong to blame my poor body for something my mind / head / emotions did to it. But still… the fact remains, ‘it’ embarrasses me. (Naughty, naughty body!)

Here in Australia, there’s a group of women who post under the theme, Aussie Curves, each Monday. They are ‘plus-sized’ women who share pictures of themselves and their entire bodies via the world wide web. And no… they’re not huddled behind someone else so you just see their head; and they’re not featuring weird arty shots of only part of their body. (I should add that it’s all about the clothes and there’s a theme each week, lest you imagine I’m talking about something viewed by those 18yrs and over!) 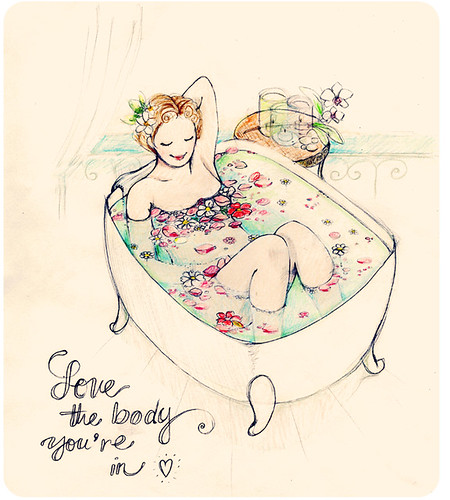 Sure I might occasionally look at some of the pictures and think that an outfit isn’t particularly complimentary, but I would never berate or judge any of the brave women for putting their larger-than-is-the-norm-in-magazine-world bodies out there. I love that they own their curves. I love that they own their bodies… (In reality, I realise that by making a big deal of the fact they’re willing to put pics out there, I’m perpetuating that furfie that only perfect specimens should flaunt their bodies! Argh!)

I’m sure some of them are trying to lose weight or get fitter or healthier, but I’m proud they’re demonstrating (something I’m yet to adopt): that you can still love the body you’re in even though you may be wanting to make changes to your life. I’ve oft-admitted putting ‘things’ on hold until…. until I’m slim (or at least not-fat) or until everything’s perfect. Not only does that mean I fritter away ‘the now’ but it also means that I don’t appreciate what I have.

And that’s something I need to work on.

Are you self-conscious when it comes to your body?
Do you take pride in your body and your appearance?