As many of you know I’m doing Weight Watchers and one of my biggest achievements (even more so than the 7.5kg I’ve lost over the last 2 months) is the fact that I’m trying HEAPS of new recipes. I’m a creature of habit and usually perfectly happy to eat the same things ALL OF THE TIME. However, that’s changed as I now regularly trawl through the WW site looking for something interesting and easy to try.

It’s Shrove Tuesday tomorrow (Oz time) and although I’m not religious (AT ALL!) I’m always aware when it comes around each year, kicking off the start of Lent. While I would remain happily ignorant of such milestones, the fact that my mother is quite religious means I always know when it’s coming. Since I can remember mum has given up ‘sweet things’ (sweet biscuits, chocolates, lollies etc) for Lent. She’s pretty involved in her local Church as well, so usually participates in some pancake-related celebrations.

Weight Watchers offers a range of pancake recipes. Indeed, I salivated looking at the list. I really like plain pancakes but the notion of potato pancakes and the like was almost too much for me (HELLO!?!? Potato!!!). There were (almost) too many tempting choices.

However, one recipe stood out: Sweet corn pancakes with bacon and maple syrup. 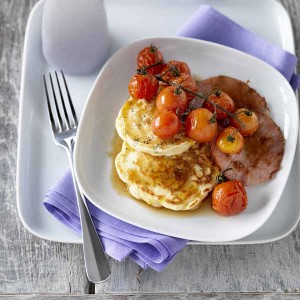 And this is where I need to confess something. I KNOW the bacon and maple syrup combo is an American (or is it Canadian?) breakfast staple, but… I’ve actually never had it. Like never ever.

However, this was the perfect opportunity to try, so I invited my mother to an early Shrove Tuesday celebration and we spent Saturday morning cooking up a pancake feast.

And I’m pleased to announce that the recipe was a resounding success – even though we had to use gluten-free flour (as I’m coeliac).

For those not in the know, GF baked goods are often problematic. They fall apart or don’t rise etc. Fortunately mum suggested the small amount of flour in the recipe  meant that (for a change) the end result wasn’t impacted by the GF swaps.

It was astoundingly simple (and the recipe is in the link above). We put the tomatoes and bacon in the oven while we whipped up the batter. (Not literally. I don’t have beaters and a whisk was sufficient!) 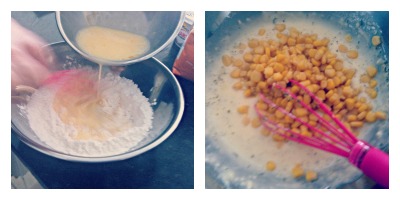 Then it’s just a matter of putting dollops of the mixture in a hot non-stick pan. The recipe included oil, but my frypan (a cheapie from Target) didn’t need it and we used non-stick spray.

I must confess that mum and I ate the first slightly misshapen and not-very-brown test pancake (on its own) and I was surprised at how much I actually liked the pancake mixture with the sweet corn.

I’m not terribly expert at ‘plating up’ but I think we did a pretty good job.

‘Twas overcast but still pleasant on my verandah.

However… now for the big reveal.

I didn’t like the bacon and maple syrup combo! Not at all. Quite frankly North Americans / Canadians must be insane!

Fortunately I’d only put a little on the side so after deciding (either) the bacon ruined the maple syrup or the syrup ruined the bacon, I happily munched on my pancakes with bacon and roasted tomatoes sans syrup.

As an aside, we spread a bit of ricotta on one of the leftover pancakes and it was very nice on its own.

Bizarrely the recipe was lower in points than my usual breakfast dish. I actually really liked the texture of the pancakes (with the corn and chives). It occurred to me that I could mix the batter up the night before and make the pancakes for brekkie the following morning. In fact, you could possibly keep some of the batter made up for a day or two. And if rushed for time the pancakes were nice with just the ricotta. (And would be a handy lunch!)

So… there you have it. My most recent revelation:  Combining maple syrup and bacon is a waste of two perfectly good foods.

Are you a fan of the bacon and maple syrup combo?
I keep seeing bacon flavoured stuff and – while I love bacon – I just can’t get my head around it!

Disclaimer: I have been given a free six month online membership to Weight Watchers but my (ingenious) thoughts, opinions and words here are my own. Please check out the program for yourself before making any decisions.