I’ve written a few posts over recent weeks about my proposed move to mindful or intuitive eating, rather than continuing to ‘diet’. I’ve been ‘dieting’ for over 30 years now and there have been many successes and failures during that time. My weight has ranged from 47kg to 130kg; and in more recent years, I’ve lost and gained the same 20-30kg again and again.

So, I’m trying something different. I hope. An eating disorder therapist I saw in the early 2000s suggested I read the book, If Not Dieting, Then What? by Dr Rick Kausman. So at the time, with her help, I tried ‘not-dieting’. I did quite well for a while and maintained the weight I was at…  But in typical fashion I got impatient about losing more weight and quit seeing her. Old habits set in; I started dieting again, and eventually regained the weight I’d lost and more. 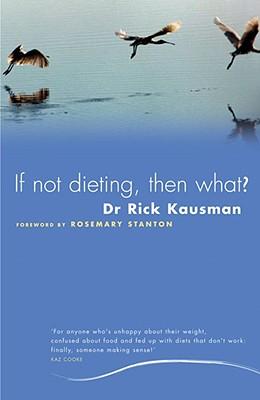 I re-read that book recently (writing about it here) – in an attempt to focus as much on the mindset issues relating to my weight as on the act of consuming food. The book makes a lot of sense and so I’m re-starting on that journey to focus on: eating what I want IF I really want it, when I’m hungry. I realise that – when you put it like that – it’s not really rocket science, but sometimes we (and by we, I mean me!) overthink things so much we lose touch with the basics. Habits ingrained over the last 30 years do not help matters either!

Fortuitously, just after I re-read the book, Dr Kausman released a slideshow, used in his workshops, which feature a range of slides based on his ‘empowerment cards’. The messages in these slides are powerful. Again, it isn’t rocket science but… we all need reminding.

These tools have come at a point when I have really needed them. I lost 20kg (44lbs) in a three month period last year through a weightloss program (12WBT, for those ‘in the know’). A subsequent ‘round’ of the program only resulted in a 5kg loss for a range of reasons but I’ve spent the last six or so months yo-yoing about that 5kg mark and not continuing to lose the next 20kg I need to lose.

My motivation has waned and my commitment floundered. Over the first few months of this year I fell into a bit of a hole – furious with myself and my inability to ‘diet’ and lose weight; but equally despairing of the concept of deprivation, which I feel the moment I restrict certain foods, count calories and so forth. As a former sufferer of an eating disorder it’s way too easy for me to become completely obsessed with food, my diet and my weight.

So, although I’m a long (long) way from where I need to be, I’m feeling hopeful about my not-dieting approach. Historically I’ve only ever dieted or binged. There’s been no middle ground. Until now.

To celebrate this new approach I’ve decided to host a blogging giveaway because I want to share some of my recent inspiration.

The first prize winner will receive a copy of Dr Kausman’s If Not Dieting, Then What? book (review available from my previous post) as well as his book, Calm Eating, which features Dr Kausman’s own words as well as quotes from clients and other writers.

In addition, the first prize winner and four runners’ up will receive the very-fabulous empowerment cards (valued at $25), comprising 64 business sized cards in a lovely little box – to use as you choose: turn one over each day, scatter them about your house to find when you most need them, or stick them in places you look every day. I bought some for myself and have put three next to my computer… though I plan to shuffle through the others on a regular basis – perhaps swapping those with ones I’m looking at each day. 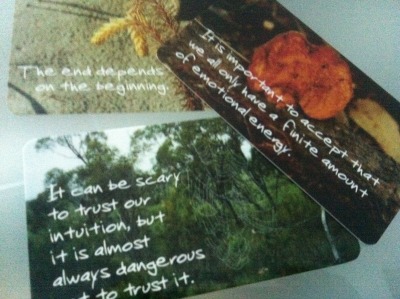 These three cards are my favourites. At the moment anyway. I suspect that will change from time to time, depending on how I feel…. But at the moment these mean a lot to me because: I’m at the beginning of my journey; I need to trust myself AND my intuition, thinking and feelings more; and I’m such an overthinker I constantly exhaust myself overanalysing everything I (and others) say and do and I’m prone to take on others’ emotions and feel a sense a responsibility for their feelings as well as my own.

I’ve put some additional photographs on my Facebook page (in an unscrupulous attempt to get more ‘likers’); but to have a chance at winning one of these five prizes, all you need to do is leave a comment on this post. I’d love to know which card / saying you can most relate to and why. The cards are all viewable on the clip above.

I will draw the prizes out randomly (no pitting one response against another!) and the competition is open to everyone and anyone around the world, although you can only enter once (you can, of course, however leave additional comments if you want to reflect on others’ responses). The competition will close next Friday 25 May 2012!

I should note, that while I’ve funded this giveaway myself, when I was ordering the prizes (and my own goodies) via the internet I mentioned it was for a competition and was provided with the Calm Eating book free of charge, for which I’m greatly appreciative!