I have new sneakers. I know that’s not a big deal for most people. Indeed once it wouldn’t have been for me either. When I was a regular gym-goer and exerciser I used to get new sneakers (aka: sandshoes, runners, joggers) each year. I was – back then – a Nike addict so the brand was usually a no-brainer and often I had several pairs, cross-trainers for sport or gym classes; and running shoes for… well for walking.

Regular readers would know however that my exercise regime has been sporadic over the last decade (or two). When I’m on a fitness roll – as I was before my seachange – I attended gym classes 4-5 days a week. And sometimes walked as well.

Of course since then, I’ve basically done SFA.

I restarted some exercise classes 4-5 months ago and have written about the over-50s classes I attend locally. I enjoy them despite my usual apathy re leaving the house but injured my achilles tendon recently and had to have a month or two off. Weirdly that actually impacted me more than the heart trouble I had during 2020 and I think it’s because I overanalysed my situation. My very long and tortured exercise / disordered eating history means that I second-guess myself constantly.

Was my ankle / tendon really too sore to walk, or was I just being lazy?

However after Christmas I decided the injury is as it’ll ever get and when my mother asked what I wanted for my birthday I suggested money to put towards new sneakers.

My old sneakers were eight years old. I know this because I wrote a blog post when I got them. I’d only recently moved and wanted to pursuing ‘blogging for money’ and it was actually my first sponsored post. I was so excited. I got paid ($100 or so I think!) AND got new shoes. I did have to travel to nearby Bundaberg but it was worth it.

If you read that post you’ll see it was confirmed I was a supinator and tend to roll outwards on my feet and ankles. I decided to do more research before buying this time around and discovered the pronator / supinator thing is really no longer a huge deal. Most sites I read just suggested good cushioning.

What garnered more attention was the issue of plantar fasciitis. (Which I’ve had a number of times.) After much searching I discovered a few brands and models of shoe best for that, along with shin splints (another regular issue I have): Brooks Glycerine, followed by Asics Gel Nimbus / Cumulus.

Of course, options locally were limited and what I’d identified weren’t on sale, so I was forced online. 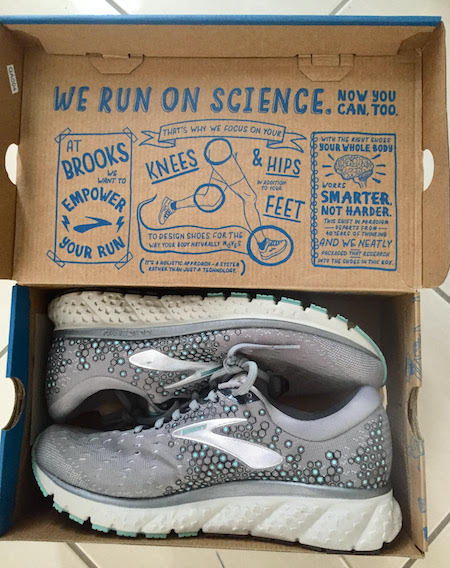 They eventually arrived on Friday and are ridiculously light. When the delivery guy handed over the parcel I joked that he was giving me an empty box.

Because I have tiled floors and my achilles still hurts I wore them in my house over the weekend and I must confess I’m not entirely sure I made the right decision. Not about the shoe specifically, but I think I really needed to try them on. My immediate sensation is that my right ankle rolls out more and the sole is shaped in a way that allows this to happen.

But… I wore them to class this morning and there were no incidents so only time will tell.

I realise this topic is ridiculously trite… but do you usually stick with a particular brand? Or mix it up? And is ‘trying them on’ a no-brainer and NOT doing so a rookie-mistake (for someone who isn’t really a rookie but trying to be thrifty!)?