As you hopefully know, I ventured into a psychologist / dietician’s office this week. Happily the therapist in question also mentioned that after 20+ years in practice, she’s also doing a PhD in something to do with obesity and… ummm… can’t remember… mental stuff. You know… that mind/body shit I’m always going on about, which hopefully means she’s well-versed in long-term aberrant dieters like myself.

Anyway, so far so good. Obviously appointment one was mostly about: who I am and how did I get so fucked in the head. Well, almost… but not really. But as I’ve been through ‘first dates’ (with therapists) a few times now, I knew what to expect.

And… I’m actually pretty good at divulging my life story.  I obviously enjoy talking about myself (I mean, HELLO!?!) and I like to think I’m pretty astute (and I mean that in a non-arrogant way… I hope) when it comes to knowing myself and what I SHOULD and SHOULDN’T be doing. Etcetera.

So, I’m pretty good at laying myself bare. “These are my faults!” I announced… though she probably could have named them herself after my hour diatribe.

The dietician/psychologist mix sounds like it’s going to work for me. As well as cognitive based therapy (CBT) I have to confess I’m happy she’s a bit of a psychodynamicist (not sure if that’s a word, but I mean someone with Freudian roots).

I don’t think she’ll be like the Freud-loving psychiatrist I saw for two years while at Uni in the late 1980s… during which time we hadn’t moved out of my childhood. He would sit there and scribble notes madly as I talked. There’d be silence as I looked out of the window waiting for him to finish writing. Then – without fail – he’d look intently at me and ask “What are you thinking?”  I always wanted to say, “I’m thinking, ‘What the fuck is he writing?‘” But I didn’t. Cos I was nice back then. I was a ‘good girl’. I behaved. In public. I mean, I possibly had exasperated tantrums in front of my parents… but in front of everyone else I was perfectly sane and balanced. And in control.

After talking about my long history of eating issues (starting when I was 15 in 1983), we talked about my mindset issues. Well, the therapist didn’t use those words, but something about my thought patterns, beliefs, attitudes and habits and the like. They won’t be easy to change, was her advice. So I gather the old ’21 days and it’s a habit’ thing isn’t exactly a cure-all response. She said it is unlikely that even after 18 months of changed behaviour, my thought patterns will also have changed.

That kind of makes sense to me. My secretive and obsessive issues with food and exercise and twisted body image thinking started nearly 30 years ago. They won’t change overnight.

Amazingly, she thinks I’m kinda smart and self-aware. Which adds to the challenge, she said. Perhaps if people aren’t as self-actualized the ‘a-ha’ moments come earlier?

My favourite part of the appointment though was when she talked about my ‘mad monkey mind’. 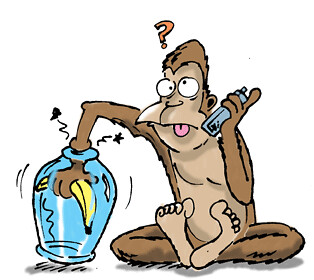 Initially I thought it was a label she was applying to just me. (And, actually felt kinda chuffed by that!) But she talked about some experiment which shows that a monkey’s mind will control its will and body to its detriment. The monkey trap goes something like this: you wedge a large piece of fruit in a container which is stuck to the ground. Once the monkey reaches in, it’s unable to pull its paw out with the fruit in it. So, while it hangs onto the fruit, it remains trapped. And yet, even as a hunter approaches, with its life at risk… it doesn’t let go.

I Googled it later. As you do. There were some references to ‘greed’ and resulting ‘destruction’. But the mad monkey’s mind, is apparently unable to rationally realise that more food will be available elsewhere. It’s stuck in a behavioural loop where, to survive, it MUST have that fruit.

The therapist explained this to me as I discussed my constant need for instant gratification (binge-eating, over-eating, unhealthy eating) DESPITE my desire to be slim or ‘normal’ and ‘happy’ and the fact that I knew I couldn’t be so until I lost weight. (I’m all about the short-term gain and long-term pain!) 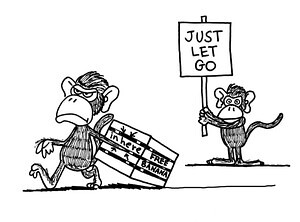 But I have to confess, rather than just labelling myself weak-willed etcetera, I much prefer to blame my mad monkey mind. I mean it’s still self-inflicted, but less-so on purpose.

I have a couple of things to do before my next appointment in just over a fortnight. It seems I will get homework. And… it seems – any change is up to me. Surprise surprise.

However, I’m happy to do as asked. If it will help. Cos I need it. And in the interim, I’ll think a bit more about my mad monkey mind…