I know I tend to be a bit of a drama queen. In my last post I whinged about some stuff which had me reaching out to the familiar for comfort. And I’ve admitted, since swearing off my ‘danger’ foods in June and July – August has seen the occasional food binge.

On top of this, after a few weeks of injury and illness, my usual exercise regime suffered and I didn’t adjust my food intake accordingly.

So I feel fat and porky (and yes I know they’re kind of the same thing but the repetition is an indication how blech I feel, physically). I haven’t been on the scale for a week or two and I’m partially in denial about what the numbers might say.

It’s funny as in the past I’ve been able to get on track with my ‘diet’ but struggled with my mindset, which has eventually led to my dieting-downfall.

However I’ve recently felt that my mindset is improving – as I wrote about in my Shades of Grey (thinking) post. So, on one hand I feel mentally healthier (about food and exercise) than I have a long time. But on the other my behaviour has been far less-than stellar. 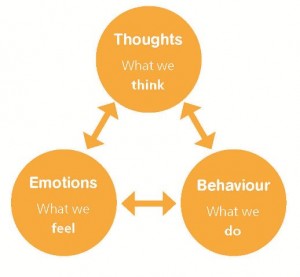 My thinking and behaviour seem to be on different wavelengths. When one’s doing fine the other’s spiralling out of control. And vice versa.

I wonder how I can get them in sync?! Obviously other things are coming into play: emotions, my environment… or something.

I’m trying to rein-in my unhealthy eating behaviour. I’m NOT dieting (counting calories and the like), but I’m trying to make more sensible decisions – predominantly about what I eat at home which is really the only time I overeat or make unhealthy choices.

I haven’t been successful on the mindful / intuitive eating approach to date. So, my plan is to AGAIN – swear off my trigger or danger foods (namely corn chips and chocolate) for the time being and make better choices at night and on weekends. Cue exhausted sigh.

Are your mindset and behaviour in sync?