I was supposed to return to my exercise classes today.

Regular readers may recall I’d finally started doing some exercise a month or two ago – just a couple of circuit classes a week – but it was better than nothing. And after just a half a dozen classes they almost felt as if they’d become part of my routine – a good thing in my book, if one is to sustain any sort of exercise regime. And when I had a couple of sessions off because of other commitments, I didn’t find it too hard to get back into it.

However… the circuit classes started again on Saturday. I was planning to go. I was very committed and all… but then I stayed away on my house swap a bit longer than expected so missed the class.

My weekend was pretty busy and for a range of reasons (and other stuff I didn’t get to) I returned to work yesterday feeling mentally exhausted. In need of a break. I started fantasising about skipping the Tuesday circuit class so I could have more ‘me’ time on my day off. (I need a lot of down / alone-time, but more on that in another post!)

My mother reminded me how good I would feel after the class. I reminded myself of that sense of accomplishment – having done something I really didn’t want to do.

So I decided to go.

And then I slept badly, so… (#spoileralert) I didn’t go. The sleep thing was just an excuse I realise, but enough of one so I did’t feel entirely wretched with guilt. 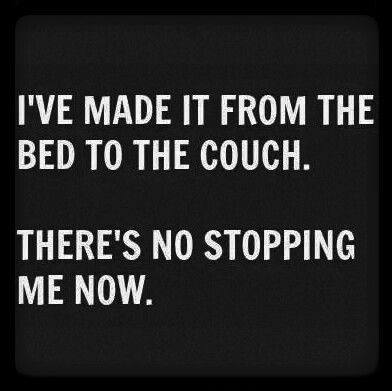 After doing no exercise and gaining so much weight I really need to start 2015 on the right foot. I know I just need to pull out the JFDI card and perhaps force myself the first time and then it’ll be ok. It’ll be familiar and comfortable again. It’ll be doable and not overwhelming and not something to dread.

In a burst of conscience I’ve messaged the trainer to let him know I wouldn’t be at the class, but I did say I’d go ahead and book in for a couple of personal training (PT) sessions – including a first ‘enrolment’ session. So… there’s that.

Naturally as I lay in bed tired and wallowing I opened various social media apps to see pictures of those who’d already been on morning runs and the like. Gah! Bastards! I hate you all.*

Have you recommenced exercising in 2015? Or – like me – have you lost your exercise mojo?
Any hints, other than the JFDI thing?

Linking with Essentially Jess for IBOT.