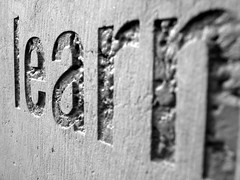 Earlier this week I finally started posting my responses to a blogging challenge issued by another participant on my weight loss program. The current challenge requires us to write a letter to ourself, titled ‘The Things I Want To Say To Me’. I will do this, but as I pondered over what I was going to say I was reminded that – about two years ago – I did a similar thing just before leaving Fat Camp. After a month at the retreat, we had to write a letter to ourselves that would be posted to us a month or so later. Given my love of words I agonised over mine for days before putting pen to paper and sealing the envelope. I still have it somewhere. But it reminded me that when I returned home from Fat Camp I also did a ‘Lessons Learned’ type post (on my now-defunct blog). It is pretty long, but I thought I’d paste it in here as many of them are still relevant for me and still require some attention.

Now that I am safely home, having survived four weeks at fat camp, I decided I should reflect on what I learned and achieved while there.

I have to admit that the time passed incredibly quickly. During the first week I was confronted by my own foibles – the extent of my ‘unfitness’ particularly compared to other campers; my perceptions of myself and others; as well as the extent to which I control all aspects of my life and am uncomfortable being dictated to by others.

Things improved after that, but there were still times that I battled with some of my demons. Heading to fat camp, I hoped that my 25yr battle with food, exercise and dieting might be resolved. It hasn’t been and realistically I realise that four weeks at a health retreat cannot erase years of obsession. I have long-known that eating and drinking are, for me, symptoms of other issues. What they are I don’t exactly know. I suspect that they stem from my need for ‘control’. The fact that (as an adult) I tightly control all aspects of my life – other than what I eat and my lack of exercise – is telling.

Experts say that girls / women / people become anorexic because they feel they have no control over their lives. They reduce their food intake because that is the one thing they can control. Twenty-five years ago my parents battled me over the dinner table as I starved myself to 45kgs. They despaired as I spent my nights in my bedroom dancing around to burn extra calories, having already exercised much of the day. Other than tie me down or hospitalize me, there was nothing they could do. It was the one thing I could control. And I was… in control.

Not any longer. Food and exercise are now the only things in my life I cannot control.

I wonder now if the underlying issues to my eating disorders (anorexia, bulimia and over-eating) will ever be unearthed. Perhaps I don’t need to know ‘why’. Perhaps now it is solely about self-control. Perhaps I need to stop relying on food to fill the gaping hole inside of me. I need to find other things to sate the emptiness.

So, though I survived four weeks at fat camp, I haven’t discovered the magic elixir that will solve all of my problems. I have, however, been confronted with, well…. me. My weaknesses and my strengths. My beliefs and my perceptions.

I have written about them in this blog, discussed them with my fellow campers and pondered them during the little time we had to ourselves there. Some of the things I have learned are things about me. Others are not.

I now know that 1 kilogram = 7700 calories, so to lose 1kg, you need to ‘expend’ 7700 more calories than you consume (over a period of time). As someone who relies on logic, this equation makes complete sense to me and came as somewhat of a surprise – that I hadn’t know it earlier.

I learned (the hard way I think) that sharing your anxiety with others doesn’t help ease it. Constantly and publicly obsessing about something (hills and steps) doesn’t make it go away and just annoys those around you.

Very importantly I learned that hills are not insurmountable. They can be hard and painful, but can be climbed. Slowly and steadily. It doesn’t matter if you are first or last to the top, as long as you know you have tried and given it your best.

I already knew, but confirmed, that I am a control freak and do need to know what is ahead of me. While I am comfortable with change and actually enjoy it, I need to know where we are going and that there is a logic to it.

Finally and surprising to me was the extent to which Victorians are ridiculously obsessed with Australian Rules Football and discuss players as if they are intimate friends. The obsession pervades all aspects of the State’s culture and is akin to some form of mass hysteria(!!).

So,14kgs lighter, with lessons learned and many kilometers of hills under my belt, I farewelled our trainers and the other campers and headed home. The feeling was (and is) almost impossible to describe. I am reminded of prisoners leaving jail; of addicts leaving rehab. I wandered around Melbourne airport, bereft. While our classes at camp discussed ‘the outside world’ and its temptations and prepared us for ‘after’, I felt at a loss. I roamed from café to café, looking for something suitable for a coeliac AND a no-carbohydrate diet. I ended up with a diet coke. On the plane, I was offered cake, or biscuits – or an apple. I could have none of them. Eventually they found me a small packet of almonds which I ate, even though they were salted.

In my apartment, I opened my refrigerator and looked inside. After a month away it was bare. Dinner time and my options were limited. Even my ‘healthy’ frozen veges including peas and corn (a no-no on a no-carbohydrate diet) were now out of the question.

It wasn’t just the food. While at the airport and on the plane, I found myself teary and unsure. Even now, everything feels different. I don’t fit. After four weeks there, the camp had become my ‘comfort zone’. The outside world is now unfamiliar to me. It is a new challenge which I wasn’t expecting. I thought I was prepared. I wasn’t. I’m not. Perhaps it is different for those who leave and return to family. Perhaps I feel lost because I didn’t come home to anyone. Just an empty apartment. An empty life.

Adro and the camp manager, Dante, talked to us about going home. Not just about what we will eat and how we will exercise, but about other aspects of our lives that have led to our overeating or our destructive behaviour.

I vowed a better work-life balance. Not just in hours, but in also quality. I can no longer live a life where the only enjoyable thing I do each day is drink and eat to excess. There must be something more and my next task is to find it.