I know, I know… you’re worried I’ve rushed into things, but – believe it or not – I have sussed out this very same gym on a number of occasions.

Long time readers will remember the gym-going-but-still-pudgy-Debbish (aka Diet Schmiet) of 2012.  An avid-gym-goer, joining one in my new locale was a no brainer. I was sick around the time I moved, but a couple of months later I sussed out the local gym options. Indeed, I even wrote a rare advice-like post about stuff to consider when joining.

And yet, I did nothing.

I did another fly-by at the same gym 10mths ago and received a 7 day free pass. Which I didn’t get around to using. And possibly lost.

The gym’s new membership officer contacted me a couple of months ago as a follow up and I deftly brushed aside his attentions – saying I was interested, but not quite ready.

I wanted to do something about my fitness. But it all seemed too hard. And I had a bevy of excuses at my fingertips.

Even now, the fact my place is on the market had me pondering the logic of joining a nearby gym given my living situation is unsettled.

But after the post I wrote a week last week, I knew I needed to do something. 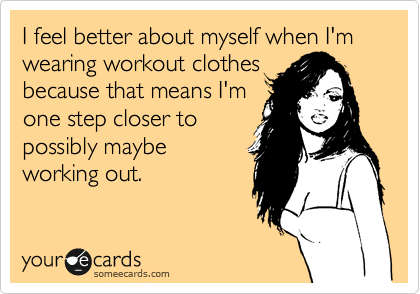 My plan was to join for a 3mth period (which coincides with the contract with my Real Estate Agent), but naturally it was a far better deal to join for 6mths so I took up that offer.

But as soon as that arrives… I plan to go. I hope.

Are you a gym-goer?
Have you ever wasted a gym membership?

* I really wanted to call this post, I bought a zoo. Like that movie, you know? But I figured that was too clickbait-like so toned it down. A little. Although my announcement is almost as bizarre as Matt Damon’s.