Okay, so the title may be overstating things a little. But ‘I wanna be back’ doesn’t sound quite as snappy. Frankly. Plus, I’m trying to be more positive. About life and stuff in general. 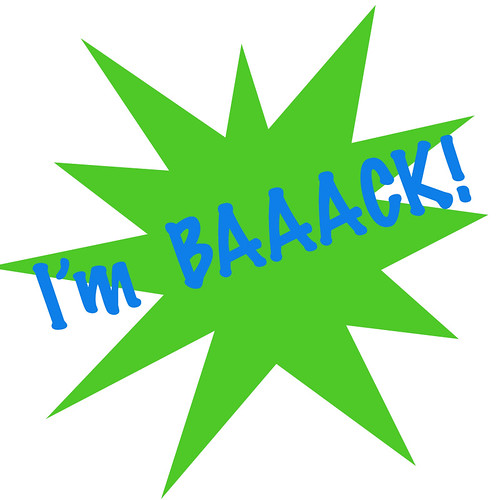 So, as a new week dawns I am channeling the ‘me’ that wrote these two pieces: Nervous, excited, pumped? Revisited; and Game on (bitches)!. The former is important because I wrote it the day before I started this weight loss program (on 22 May 2011). I hadn’t really been sure I was ‘ready’ and indeed, wondered if it was possible to be ‘ready’ – ie. to flick a switch and suddenly eat healthily and exercise. I’m still not sure it is possible, but… somehow I did. In the lead up to that post I’d been quite negative and pessimistic about my chances of success on this program. But… amazingly, Monday 23 May came around and *VOILA* I was in the zone. Immediately. How and why I have no idea. I just was… and other than a few minor hiccups I basically remained there for three months. I had good weight losses, started an exercise program which I stepped up when I was able and – most importantly – I was chirpy and happy with life in general. Sure, I had my fair share of crap happening… my place was on the market (but didn’t sell) and I was searching for something new. I didn’t get a job I’d hoped to get. But despite all of that, I hung in there.

After some waywardness and end-of-program partying I again became resolute. My Game on (bitches)! post was written when my motivation was waning and I’d taken the time to consider what I’d achieved and my alternatives. And… interestingly enough, I had the same thought yesterday. Sadly it didn’t stop me from buying junk food, but I did essentially stop and decide that I didn’t want THIS to be my world again. Just eating my way through my life and yet dreading the confrontation of tight clothes and increasing numbers on the scales. I. DON’T. WANT. THAT. LIFE. ANY. MORE.

So… as I draft this Sunday night I’m doing some planning. I know that just a few days ago I said I wouldn’t stress myself out by forcing myself to make decisions and obsess about the direction of my life, and I still don’t want to… but while I will take each day as it comes (you know, cos of karma and all of that), I will attempt to feel better about my behaviour and attitude as the days pass. I CAN take responsibility for that.

You’d be well aware I’ve been feeling a bit overwhelmed of late about my weight loss program… well, about the fact that this round will soon end and I have lost sweet fuck all weight! In fact, last fortnight I gained more than I’d lost in the preceding six weeks! I’d secretly thought my 10kg weight loss goal for the 12 weeks was a bit conservative, having lost 18.7kg the first round; but given that Week 8 has just ended and I am down less than 3kg, I am severely fucked! I think this has caused much of my panic. ‘Oh my god, I’ve only got four weeks left of the program and I’m not going to lose much / any weight!’ The finale party date in December has been sticking in my mind. I mean, how can I go to that if I have failed miserably on the program?!

But… other blog reading and my own recent post about end-of-year tiredness, disillusionment etcetera has had me thinking.

A blogger I follow has set herself a pre-Christmas goal. I pondered on that, thinking to myself, ‘But it’s too late, my program has finished by then!’ and I was forced to slap myself around the face a little. THIS IS ABOUT MORE THAN MY WEIGHT LOSS PROGRAM. 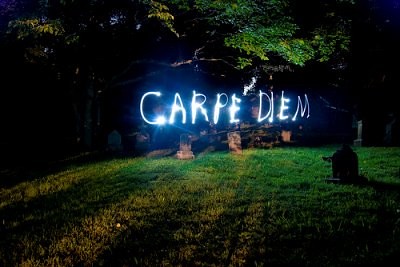 As a result, I’ve realised that – the struggle I’ve had with the program (through no fault of its own) – is that the program itself has become my focus, rather than the losing weight, getting fit etc. Because I haven’t followed the eating plan and exercise program faithfully I thought I was somewhat immune to the obsessive thinking that usually plagues me. I’ve been wandering about acting very zen… ‘Oh, I’m just keeping to the 1200 calorie limit and doing some exercise,’ I say. But – as I’ve articulated previously – my life (for some time) has been all about this program.

I’m ashamed to confess (*gulp*) that when I first started this program I did think about what I’d have to do to ‘win’, because after all, it IS a competition. When I saw some of the other big numbers people were losing I was horrified and I’ve written about my temptation to throw in the towel. I mean, if I couldn’t be the best, why even try? Right? But… I hung in there – though possibly because I thought I’d catch up. I don’t know. On finale night I don’t THINK I thought I’d win a prize, but (in my true overanalysing style) I can’t help but wonder if unconsciously I was secretly hopeful, despite knowing I’d lost less weight than many others.

Is that why my motivation has waned, I wonder? And – how shameful to admit such a thing! 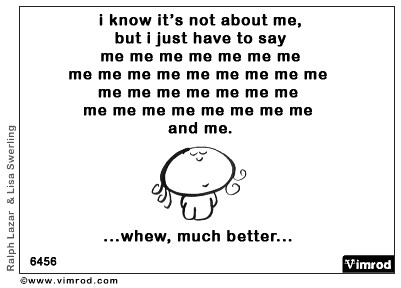 But… I spent some time yesterday re-reading over my own blog posts (from the first round of the program – when I was chirpy and motivated, rather than full of excuses and miserable) and I’ve decided to focus on MY OWN WEIGHT LOSS. I don’t need to worry about my program ending in four weeks. I can still lose 10kg before Christmas if that’s my goal. I can reach double digits. I’ve got to remember who I’m doing it for. I shouldn’t be trying to impress others on my program, or the program leader. I shouldn’t care if others do better or worse. It’s all about me. Me, me, me!

I’ve been moping about acting as if ALL IS LOST. But it’s not. Not really. It will sound wanky, but the ‘life is a journey’ saying popped into my head. I need to forget about deadlines. I need to just keep travelling…