In early-mid August, just before the last round of my weight-loss program ended, I joined a little gym near my workplace as after nearly three months of weight loss and increased exercise I felt brave enough to try some group classes in a gym setting. 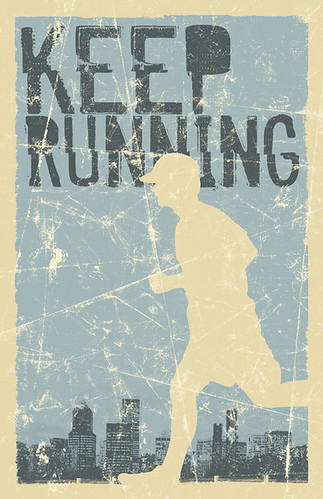 At the same time I decided to embark on the Couch to 5km (C25k) program, which purportedly gets you ‘up off the couch’ and running 5 kilometres in eight or nine weeks, depending on the program you follow.

I’ve never enjoyed running. Even when young and fit I didn’t ‘jog’. Out of necessity (and obsession) I did endless suicide runs (aka shuttle runs / windsprints) at the nearby basketball courts. But even then, short sprints were one thing; lengthy jogs were entirely another thing.

On this weight-loss program I’ve come across many who LOVE jogging. And, I follow blogs of those committed to fun runs and marathons. So, naturally (cos, why wouldn’t I?!) I felt an obligation to learn to run. And to learn to like it. Dammit!

So back in August I did my first week of C25k, although had a few days away before embarking on week 2. I joked a bit about how easy I expected it to be. Week 1 involved 8 x 1 minute runs with breaks in between. Week 2 required 6 x 1.5 minute runs. ‘No problemo!’ I said.

And yet… I struggled. And I hated it. It brought back all of those horrible memories of the much-dreaded and much-obsessed-about suicide runs of my youth.

So, in mid August I pondered on whether to continue. “Sure,” I said at the time in this post, “I can do this.”

And I don’t think it’s mattered. I’ve been doing circuit classes, hip hop classes, exercise bike interval sessions, Zumba, Pump and some boxing. I’ve exercised six days a week for the past few weeks. I’m back into a routine… but I still read other running-related achievement-tweets and feel a sense of failure. Now, I know I shouldn’t compare… and perhaps some avid runners couldn’t do a Zumba class to save themselves, but there has to be something to this running gig as SO many people do it and love it. (I don’t think it is quite as cult-like as the lycra-clad cycling mafia, but it’s close!)

So, a week or two ago I restarted the C25k program. It took me just over a week to fit in the first week’s three runs – given my schedule of other exercise, but I’ve ‘kinda’ settled into a routine of running on the treadmill on a Tuesday and Thursday. (Am definitely not confident / brave enough to run in public!)

I was required to do my first week 2 run on Tuesday this week. I was mightily nervous given that I crashed and burned at this point last time and I still remember feeling shocked at how hard I found the 6 x 90 second runs.

Sure, this time around my knees are still feeling the strain of every step and I have a permanently sore right ankle… but I coasted through the six runs on day 1. In fact, I got to the gym a bit later than planned (pesky work interfering with my exercise routine!) so had to short-cut some of the 2 minute (between-run) walks, to get the whole program in before I needed to catch my train home.

I’m loath to get too excited because things can come back and bite you and I’m tired of making promises I can’t keep or sprouting crap I don’t live up to. But… I was thrilled that it seems that I’m getting fitter. I’m mixing up my exercise a bit BUT despite (or because of) the variety, it seems I’m fitter than I was just a few months ago.

Today I’m due to do Week 2 run 2, so I hope I haven’t jinxed myself and that I again find it (at least vaguely) comfortable.

For some extra motivation I will leave you with this which I came across in another blog recently.