Years ago an Australian health insurance company had a series of ads and “I feel better now,” was the tagline.

The jingle came to mind as I wrote this post because – as it happens – I actually DO feel better now. (Not necessarily mentally, but that’s a whole other story!)

Almost two months ago I had a sore throat. It came and went for a week or two before settling-in to stay. I had a cough, stitch in my side and bizarre rash. I felt miserable but assumed my immune system would kick in and I’d just get better. It was three weeks before I went to the doctor, which is when I discovered I had some virus which required a variety of drugs. It took a while for me to improve and I got a sore ear in the interim. On top of the general malaise and miserableness the antihistamines I was on for the rash kept me sleepy and lethargic. But finally… almost two months after getting sick, last week I realised that I was actually feeling better.

The discovery was actually quite sudden. I’d been wallowing for weeks…. you know the feeling – when you are so sick, it’s almost impossible to remember what it’s like to feel well.

I was sitting on my balcony with my mother on the weekend when I realised that I actually felt okay. Even WELL. Finally I had no ailments rendering me apathetic or lethargic.

On Sunday I rose early and went for a walk. Something I haven’t done in ages. I’ve been doing a thong (leisurely) walk a couple of times a week and last week even walked on the beach on a couple of occasions. (A habit temporarily on hold cos I cut my foot on some coral when kayaking.)

Did you notice how I slipped that in…? That I went kayaking?! My Facebook fans are already aware of this achievement as I shared this pic below on the day of the event (I’m the red blob!). 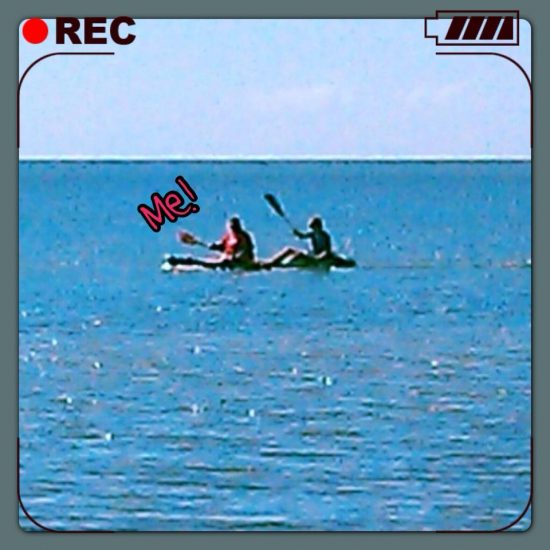 A friend’s partner has a double kayak and suggested I join them to try it out. Which I did… initially with one of his boys and then alone. And I enjoyed it. Naturally I kept worrying I wasn’t paddling as perfectly as one should and querying EXACTLY where to hold my hands, how deep to dunk the paddle and so forth, but… I did it!

We didn’t paddle for long but my hands were sore and slippery, so first on the agenda will be some gloves of some sort, as well as some surf shoes given the coral cuts. Oh, and a bloody kayak and paddle probably need to be added to the “To Buy” list as well.

I’m excited about the idea of a new healthy hobby. Of course I’m finding it hard to justify the purchase of a kayak at this moment in time, but perhaps once I find a job it will be added to the ‘Must Have’ list!

Although it pains me to say it, I’m actually thinking of heading back to the Golden Oldies Zumba class this week. I haven’t been for a couple of months and suspect my fitness has suffered. I know I said the new (and more zen) me wouldn’t stress about fitness, but while I’m not forcing myself to the gym I figured I’d take in the occasional Zumba class.

And, as it happens, my break from hard-core exercise seems to be working… in that I’ve thought I may well join a gym again when I eventually get a job. Working will add some structure to my life and will make going-to-the-gym seem less of an anomaly. If that makes sense.

So… back to the point of this mostly-pointless post: I’m feeling better. I’ve realised that the extreme apathy I struggled with for quite some time WAS predominantly due to the fact I felt like crap. And now… no not-living-my-life-to-the-full excuses, cos I really do feel better now!

Do you sometimes wonder if you’re REALLY sick, or just skiving off?
Have you had sickness that’s just hung on and on and on?
Do you want to buy me a kayak? No? Well, hmph!

** Linking up with Essentially Jess and the IBOT team today!