I’ve been thinking about my father a lot lately. In September last year he was hospitalised for some bowel-related issues and never returned home again. I was in my hometown at the time and little did we know when we left home one Monday morning to take him to hospital, that exactly six weeks later he would be gone. Forever.

When it became obvious he wouldn’t return home I became slightly obsessed with the fact that his favourite sneakers sat under a stool in the bedroom he and my mother (and his wife of 48yrs) shared. They were just left to languish in his absence. As were (are) we all.

We’re coming up to the anniversary of his passing. Around this time last year he’d been transferred to our State’s capital city (where my brother and I reside). My mother had come to stay and we’d just found out that much of his body was riddled with cancer and he had minimal time left with us.

Like all loved ones, he lives on in our hearts and in our minds. And I’ve come to realise I can learn a lot from the way he lived his life:

1. He liked to move it, move it
I wrote recently about the most-excellent start my brother and I received – encouraged to play sport from a young age and being very active. My father was an elite athlete (a professional footballer in the days they received little more than free board) and quite fitness-conscious. He became less active as he grew older (and weaker – I’ve mentioned his heart transplant and subsequent dementia) but was still playing tennis into his 60s.

Not only was he into sports (and encouraged us to be), he wasn’t a lazy sort of person. He DID things. Incidental exercise came naturally to him.

2. Vegetables, schmegetables
Although I inherited a lot of things from my dad (and mum) I did not inherit their love of healthy foods. Dad in particular LOVED his veges. My brother would claim that my parents overcooked them to death, but at least dad filled his plate with them. And I mean the healthy kind (not potato, peas and corn – which I lay claim to). He loved the weird stuff: cauliflower, broccoli, zucchini, pumpkin, squash and the like. Mum was the bigger fruit eater (being a fan of mangoes, rockmelon etc ) but my father also ate A LOT of fruit – loving his mandarins, grapes, bananas and so forth.

Like I said, a trait which seems to have skipped a generation in my case.

3. Size matters
Dad sometimes ate things he shouldn’t. He liked a biscuit with his cup of tea. As he grew older, mum had to chastise him for opening the  biscuit container or standing at the fridge peering inside. BUT he only ever ate small amounts of anything. A couple of biscuits was enough.

And – throughout his entire life – he ate dessert. He’d push aside his dinner plate, sometimes unfinished because he was ‘full’. But was agog at the notion that he should skip dessert. He’d occasionally have things like prunes and jelly, but most often he had my mother’s creamed rice. Each week she’d whip up a batch, storing it in a large container in the fridge.

Now if that was me and I ate creamed rice, it would all disappear on day one. But that wasn’t the case with dad. He’d put a few spoonfuls into a bowl and seal the container for the next night. If he was being a bit naughty he’d just eat some out of the container. Again though, just a few spoonfuls.

He knew when to stop! 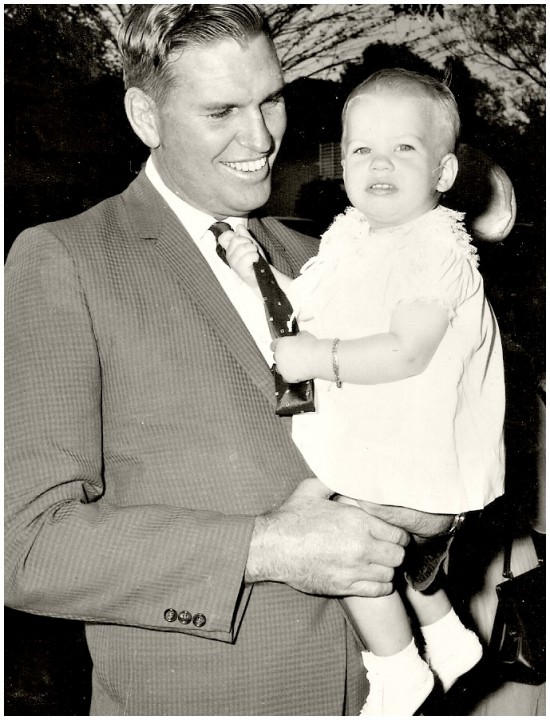 4. Minimal food-related angst
Dad came along to a local “Lighten Up” program with me at one point. I was in my mid 20s and had started to gain weight after my anorexic and bulimic periods. Dad had a little tummy he didn’t like. The program was very basic – something free being offered by the local health department which included advice re food groups, calories, exercise and so forth.

As he was an athlete back in the days before carb-loading and when you did potentially-damaging warm-up stretches and so forth, all of this was new to dad.  My eyes glazed over during most of the sessions, but he soaked it up.

“Did you know that chocolate has more calories than a slice of bread?” he’d say… utterly astounded. Well duh! (I’d think but not say. Obviously.)

He benefited hugely from being told to cut down his use of margarine or butter and switching to low-fat milk and the like. It occurred to me then (and now) that his own attitude towards food and eating could have served me well. It’d never occurred to him (or many men, possibly) to pour over a calorie counter book. Food was just food. Not the meaning to life!

5. Do unto others… (aka, if you’re not careful karma can be a bitch)
My father was a considerate man. I think I’ve mentioned this before because (although I don’t want to sound arrogant) this is something I think I did inherit from him. In fact, perhaps both of us have a bit too much of the ‘consideration’ gene.  It was the little things he did that mattered. He’d always make me walk on the inside, so that if a car was to veer off the road it would strike him first; he’d put money in the parking meters of strangers so they weren’t ticketed. He cared for relatives whose own families had little time for them.

He had a good heart (figuratively – unfortunately – not literally!)

And… he’d do ANYTHING for his family. We were more important to him than anything and everything. And we knew this.

Dad didn’t drink or smoke. He was a clean-living kind of guy. The health issues he had were DESPITE this.  He wasn’t obsessively fit and healthy, but he did a lot of things right. He was far from an intuitive eater and was always very rigid in his mealtimes: morning and afternoon tea were almost compulsory, along with his pre-bed cup of tea. He didn’t eat mindlessly or over-eat excessively.

He didn’t just view food as ‘fuel’; rather as something to be enjoyed, but not worshipped.

Yes indeed, I could learn a lot from my father’s approach to health and fitness and – of course – I wish now I’d acknowledged that more when he was still around.

Are there lessons (good and bad) you learnt from your own family?
Are there some you SHOULD have learned?