I tend to think of myself as a bit of a bitch; but I think I hide it well. Mostly I’m overtly horrible to (and about) myself, but nice to others. However… I’m a bit like a closet bitch and occasionally think rude and nasty thoughts about complete strangers.

Last night when I was unable to sleep I remembered an article I read earlier in the week about gym habits and etiquette. It got me thinking about my own gym-going experience. And… because I couldn’t sleep I jotted some of those things-that-irk down.

It seems that my usual politeness filter was already asleep so in the light of day I realised my list is – ahem… how to say it? – somewhat bitchy.

I’ll start with the basics and I’m sure these things universally piss off other gym goers:

1. Hogging the equipment
If the gym’s deserted feel free to use 12 pieces of equipment at once and drape your belongings over them the entire time. But, if there’s anyone else who might be wanting to use the same equipment then bloody well be considerate and SHARE! Oh, and just a heads-up…  the same thing goes for hogging the showers or hairdryers (etc) in the dressing room.

2. Not wiping equipment down
We’ve all been been exposed to the sweat drenched weights bench or exercise bike seat. I’m a bit of a sweater myself. But I use a damned towel as should everyone else. Many gyms are pedantic about towels and offer disinfectant spray and the like. They do this for a reason. D-oh!

3. Not shutting the f*ck up
Your partner might like it loud, but some of us are at the gym to escape the every day crap or to get some peace and quiet. Loud grunters are particularly annoying and only rivalled by those who chat loudly on their phones. We don’t want to hear you shouting orders at some workplace underling or bitching about your job. And as for the gossipers… we don’t give a shit about your husband, friends or cousin’s brother’s hairdresser.

4. Using equipment incorrectly
The rest of us don’t need the added stress of your injury or accident. If you don’t know how to use a piece of equipment / machinery, then ask. If you do then be sensible for god’s sake. A particularly annoying woman at my old gym used to run sideways on the treadmill. Most of us hoped she’d actually fall off and injure herself so we didn’t have to put up with her – although sadly she’d probably take fellow treadmillers with her before splattering on the gym floor. When in the aerobics room most of those rules apply. I used to go to a class that directly followed a boxing session and there would be huge puddles of sweat on the timber floor… just waiting to send one of us Hip Hoppers flying. And as for those people talking when the instructor is instructing… just rude. But as a regular class-goer there are a few other tidbits which you may wish to heed.

5. Personal space is just that
Unless the class is jam-packed then give those around you some ROOM. We all hate the latecomers who arrive and wedge themselves into spots requiring the rest of us to accommodate them, so yes… if you do that you will catch some glares from others in the class. And when doing moves, LOOK AROUND YOU. The aerobics room at my previous gym was tiny and other class-goers and I avoided certain people because they had no friggin’ concept. They’d just start jumping backwards or sideways without worrying about those around them.

6. The instructor is there for a reason
My own personal pet peeve… those who attend classes but like to freestyle it. Some do it accidentally (yet it still pisses me off). In my current Zumba classes there’s a woman who’s been going for years but who still does every step incorrectly and goes in the opposite way to everyone else. TIME AFTER BLOODY TIME. She’s a bit of an air-head so I haven’t decided whether she realises she’s completely out of time and about to trip the person next to her; or just doesn’t care. But then there are the fruit loops. We all know them. They stand near the front and like to ‘add-on’. They sometimes sing along, decide to change the steps a little or just act a little cray-cray. There’s one of those in one of my current Zumba classes as well – decked out from top to bottom in Zumba-themed gear, headband and all and (she told me) she just moves in the way her body wants her to. IMO: She should stop bloody well listening to her body!

7. It’s not a schoolyard
Charlotte from The Great Fitness Experiment (another blog I always read but never comment on) has recently moved town and – although was (more than) a regular at her old gym is now the ‘new girl’. She overheard some people talking about her the other day and was – understandably – somewhat upset by it. I hate cliques. Most gyms have them… those people who’ve been going there FOREVER and treat newcomers like lepers. Sadly, in my experience, it’s often women who do this (some high school Mean Girls hangover). I’ve never really attended a gym with a friend but, I have become friends with others in my classes – or at least become one of the regulars. But hopefully, I’ve never not welcomed a newcomer.

So, there you have it. A somewhat extensive list of ‘things that piss me off at the gym’; and I do realise I haven’t even started on gym attire…

And finally, although I suspect you’re fairly sure I’m perfect and can do no wrong, I may *ahem* have been a bit guilty of this: 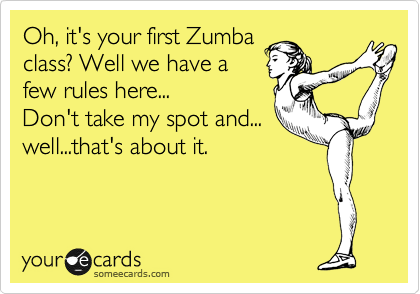 Your turn. What have I missed?
Do you break any of ‘my’ rules?