After a few angsty posts I thought I’d lighten the mood a little. It being Friday and all.

I was out walking early yesterday morning, doing laps of a nearby park – a fave locale of mine. As usual the track around the park was pretty busy with walkers, joggers, pram-pushers and dog-owners. It’s school holidays here, so there were also more kids and families out and about than is the norm.

I’d noticed a man and young boy (maybe 5 or 6 years old) on an earlier lap. They’d been running and stopped to do some (box) jumps (sans box) at one of the exercise stations around the park. When I next saw them I noticed the kid bending down onto the ground and wondered what they were doing. As I approached however I could see that the dad was teaching the youngster how to do burpees (an important lesson in life!).

Although I’m being a tad trite I actually was impressed at the father-son efforts. It reminded me of the importance that role-models play in our children’s lives and how our behaviour (as parents, relations, friends or other adults) can shape a child’s beliefs, behaviour and habits.

I grew up in a very active family – something I took for granted until I was older.

My own father was a talented athlete, representing his State in Rugby League and excelling in sports like tennis. Although not able to compete later because of injury etc, he played tennis and squash at various stages of my life; in fact he played tennis even after his heart transplant and into his 60s.

My mother played netball as a youngster and as an adult played netball, basketball and squash. In fact, I have memories of my entire family participating in weekly squash games at a local centre. (Well, when I say that I mean my folks and my older brother. I watched and partook in lollies – especially musk sticks – from the squash centre shop!)

My brother and I were encouraged and expected to play sport. We both tried a few things before (mostly) focusing on basketball. Growing up our lives were as much about sport – games, matches and training – as anything else.

Coming from a small town, my friends were similarly inclined – though many with different interests. We all pretty much did ballet of some sort until we hit double figures and needed more time to devote to other sports. Field hockey was a popular sport amongst my friends, for example.

Which is why, when I got to University (having moved to the ‘big city’) I was shocked to find people who’d NEVER PLAYED SPORT. These people begrudged their physical education classes at school and despite other hobbies, hadn’t ever participated in individual or team sports!

The concept was foreign to me. I’d grown up with the notion that sport was a part of life. My anorexic need to exercise aside, I grew up with the belief that one didn’t exercise for exercise’s sake. One ‘trained’ for something. Even at University, I had enough basketball and netball training sessions and games a week to mean that any other form of exercise was rendered redundant.

And then somehow, sometime I rebelled. BIG TIME. I stopped doing everything. I gained weight. Exercise became a dirty word. No longer was physical activity about ‘training’ but rather about ‘exercise’. It was about burning calories and NOT BEING FAT.

My own fucked-up-edness aside, it occurred to me yesterday that I was given a most-excellent start in life on the fitness and exercise front. I might not be able to swing a bat for shit, but I can catch and throw balls; I’m pretty coordinated; I can follow instructions and pick up steps or moves quickly; and I’m aware of the need to be cognisant of  my teammates those around me.

As I looped around the busy park it also occurred to me that the face of exercise has changed a lot over the course of my life. My own mother attended some ‘national fitness’ program when we were toddlers, but (at least here in Australia) aerobics (a la Jane Fonda) really didn’t make an appearance until the mid 1980s. 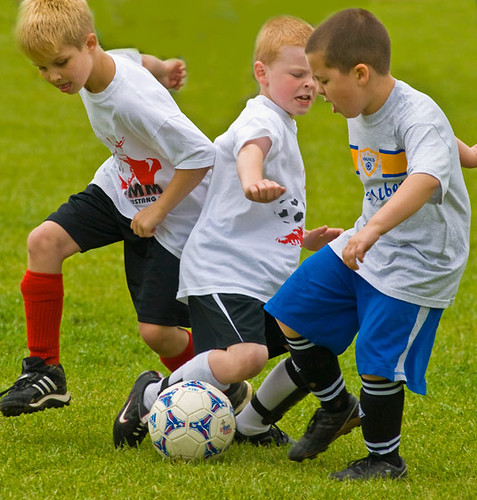 Once upon a time walking was something you did to get somewhere. This often occurs to me now when I’m out and about and see myriads of people of all ages, shapes and sizes out walking. When I was growing up going walking for exercise was almost unheard of. Sure, you’d go for a jog if you were in training, but walking or power-walking. Hmph!

Health and fitness seems higher on the agenda now than it once was. Perhaps it’s because our lives are more sedentary that we need to pump weights and pound the treadmill. Or perhaps we’re just busier and need to be more efficient when finding time to focus on our health.

Whatever it may be or however jaded we can get as the latest exercise craze or training technology hits our shores, there’s one thing that I think we can keep doing either way, and that’s walk the talk. We can encourage our kids to lead healthy and active lives and we can show them how it’s done.

Do you think you are a good health and fitness role model for your kids, or those you come into contact with?
Is there more we (individually or as a society) should be doing?