In a recent post I talked about how I ‘wish’ my life away. Not wanting to do the hard yards it takes to lose weight, I yearn for months to pass so I can just emerge – as if newly hatched, looking all svelte and lean. I said that, in my mind at those times (which is more often than I’d like) I’m often walking about and I’ll think, “I wish it was 6 months’ time and I was walking along here but I was 60kg thinner.” For example.

Writing about that made me wonder how much I really want it. What would I really do or give to lose weight. Would I sell my soul, or my mother? If a genie appeared before me today, what would I wish for? World peace, a cure for cancer, or would I selfishly wish to be slim? God, it sounds terrible, but I may wish for the latter. But would that solve all of my problems? 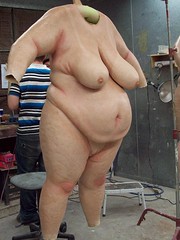 A blog I follow, Big Girl Bombshell, last week referred to an experiment where gorgeous models don fat suits for a day to see how they are treated as a ‘fatty’ as opposed to a slim model. BGB actually wanted to revisit the experiment, but the slim friend she approached though t it in poor taste, saying (in an enlightened manner) that she could never understand what it was like to be ‘larger’ because she would be able to take that fat suit off at the end of the day.  As a result, BGB flips the experient around a little, and asks:

What if..just what if…you woke up thin?  What if for just one day, you could take off the fat suit and be at a normal weight?  What do you imagine you would say to yourself when you look in the mirror? How do you think you would be treated differently?  How would you move or eat or act differently?

I thought about this on the train into work today. It started because I was sitting opposite a very cute guy. He smiled at me at one point and for a moment I felt warm and fuzzy and there was a vague stirring (no, not that kind!) as I remembered that feeling of being interested in someone and the anticipation of what might come. Of course in this case I hadn’t done a BOG check (band of gold – he was indeed wearing a wedding ring) and as soon as the warm and fuzzy feeling subsided and my smile-in-return faded, I remembered that I was (in fact) a big, fat, ugly thing and essentially unattractive to the opposite sex. He was probably being polite, or chuckling over the fact that I used the Apple symbol on the back of my iPhone (as a mirror) to apply my lipstick.

It all reminded me of BGB’s blog post though and I wondered how differently I would be behaving and being treated if I was 40-60kg less than I am now. At that point it was only 8.30 in the morning but there were a myriad of things I would have done differently:

AND at that point in my ponderings I hadn’t even arrived at work. Dressing differently and not feeling self conscious would indeed help my confidence, as I would feel less-judged by others. I believe that people see me as weak-willed and pathetic, but suspect I am projecting a bit. (I wrote a little while ago about how I judge others and myself quite harshly for being quite overweight.)

I can’t help but notice that a lot of the ‘differences’ for me are psychological. I would feel less self-conscious if I didn’t arrive at the train sweaty, or be taking up too much space, or be able to dress differently. I wonder if losing weight will change that, or will I still feel fat? Will I ever be good enough to be self-confident and feel worthy?

I’ve been almost-normal looking before, I’ve been slim before and I’ve been skinny before. In reality it changed nothing and it solved nothing. I was still me; not quite perfect enough. But, despite that, if  genie appeared before me today (please, please, please) I’m pretty sure I’d still ask to be slim.