After a concerted effort, I am finally catching up on the pre-season tasks required as part of Michelle Bridges’ 12 Week Body Transformation Challenge.  (Well, I am only one and a bit tasks behind now. Yay for me!)

The latest task I undertook (only a week or so later than everyone else – yes indeed, there is no limit to my motivation and enthusiasm!) related to our exercise program. I thought I’d already worked that out…. ie. I will do some.

But in line with Michelle’s requirement that we be more specific I was thinking I’d do 3 days of cardio and some pilates. And, my 3 days of cardio were going to consist of either a walk with a friend, or the 20min cycle thing I wrote about a while ago. And given that I haven’t even gone for a walk for 6 weeks (ie. I have done SFA) that would be a gazillion times more exercise than I am doing now. So, that was my plan and I felt very contented (ie. pleased with myself) that I had it all worked out.

My smug little smile was very quickly wiped off my chubby little face though… because according to the program we are (in fact) supposed to be doing six days of exercise per week:

Hmmm… so that would be more than the SFA I’m doing now I guess.  And more than the 3 x 20min exercise bike rides I was going to do.  I know our first born children won’t be sacrificed if we don’t strictly adhere to the program (which, incidentally wouldn’t be a problem for me cos of the whole childlessness thing) but I am cognisant that the more diligent we are, the more weight we should lose. So, I should try to stick as closely to Michelle’s exercise plan as possible. I guess. 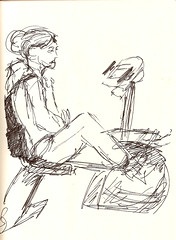 The lesson also requires us to work out where we will work out: in a gym; outside; or at home. I did 12 weeks of twice-weekly one-on-one personal training early last year. I quit because I felt I wasn’t getting any fitter (despite shitloads of money) and because I dreaded going so much that it was impacting on the rest of my life (akin to dread I had for timed shuttle / suicide runs in my teenage basketballing years). Rather than train in a park, I trained at the PT’s house because I really didn’t want anyone seeing how incredibly unfit I was. Now that I am even less fit the concern remains. Obviously. So… while participating in the 12WBT challenge, I will – in the beginning anyway – be training at home. If my shin splints ever get under control I may go for walks in the park, but I will not be doing dips on park benches or crunches lying on a towel in the park. No sirree. Not a chance.

So, I will train at home. I don’t quite know what the cardio will entail, but I hope I can make my shorter interval training fit with Michelle’s program cos I would get bored silly cycling on an exercise bike for an hour (and am only doing the exercise bike thing until I lose some weight and don’t get shin splints; and/or can do Body Jam or similar again). And, I have weights, a fitball, heart rate monitor and related paraphernalia.

And – ta da! – I am finally doing something about hiring that exercise bike (I have sent a query email!). So many of the other new 12WBTers have already started on their programs and I am flailing about aimlessly. I cannot keep delaying the inevitable. I know from experience that I feel SO much better when I do some exercise.

In addition, I notice (via the v.scary message boards) that regular boot camps – catering for all levels of fitness – are held locally. OMFG, this concept confronts me with all of my dreaded demons at once: my level of (un)fitness; AND my level of (un)fitness compared to others. I don’t mind doing some boxing or walking for eg, but the idea of shuttle runs and burpees almost makes my head explode. And we wouldn’t want that. Would we? Perhaps I will hold off on the boot camps for a while….