Yes… it’s that time AGAIN – when I plan my exercise for this next round of my weight-loss program. Last round, planning my exercise was quite challenging as I was doing nothing (yes, SFA) beforehand. I wasn’t even walking because of recurring shin-splints.  As a result, it was quite a shock to discover I had to exercise six days a week. Yes, six days a week! Shit!

The six days comprised (and continues to comprise) of: 3 days of fitness; 2 days of toning or strength training; and 1 day of light fitness/core/stretch. 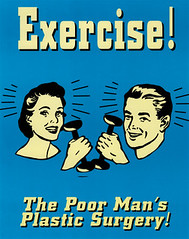 As I was coming from nothing, I decided I wouldn’t be overly ambitious and plan to run a marathon. Instead I’d hired an exercise bike, with the idea of building my fitness slightly, losing some weight and at least being able to walk without the shin-splints. Running wasn’t really an option, nor were group fitness classes. I also re-enrolled at my local pilates reformer studio and planned on two lessons a week in lieu of my strength or toning days.

And – AMAZINGLY – I did it. I think (of the 12 weeks) there was only one occasion when I didn’t get my six days of exercise in. I didn’t follow the very-detailed training plan we are given, but I did A LOT more than I had been doing. Better still, I even went to some group sessions planned by others on the program, such as boxing and a few bootcamps.

I think the most difficult thing about the exercise last time, was the guilt because others were doing so much more than me. So, while I should have been pleased at how far I’d come, I felt bad that I wasn’t doing more, or working harder. 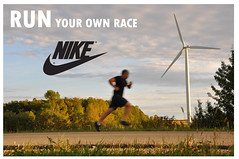 That is one of the things I want to change this round. I need to STOP. BLOODY. COMPARING. MYSELF. TO. OTHERS. In reality I have no desire to lift heavy weights. I have no desire to run marathons. I have no desire to spend hours exercising each day. What I want is to be fit and healthy. Full stop! As I said in a post a little while ago… I know a lot of people who can’t and don’t run. I suspect they will live as long as others who can and do. They are probably just as healthy. I already knew this, and have been reminded of this fact but… I need to find exercise I enjoy! Or at least, exercise I don’t mind too too much.

So, the plan for my second round of this program may – or may not – include continuation of the Couch to 5km (C25k) program. Frankly I’m not enjoying it and – though I’ve been sick this week – I worry that I’m putting off the inevitable (ie. continuing with week 2). Sure I’ve done other exercise instead – purportedly because a runny nose while on a treadmill wouldn’t be pleasant – but….

Instead, I will endeavour to do the following:

Fitness options: Zumba classes, Move & Groove classes and Boxing Circuits at my new gym; occasional boxing classes and bootcamps with others on my program
Toning/strength options: pilates reformer classes at my pilates studio; Pump classes and my own weights program at my new gym
Light fitness/core/stretch: I suspect my pilates classes would fit in here as well; walks with friends – we are aiming for once weekly at a minimum; anything else I can fit in.

There you have it. I have some options so there’s heaps of flexibility. And… I have decided to rehire the exercise bike I’ve had for the last 12 weeks because it is handy. I dreaded it when it was my only option, but now I recognise that when all else fails it is very hard not to climb aboard. Plus I still have heaps of TiVoed episodes of Escape to the Country, which I watch while doing my 30 minute interval session.

I also plan to buy some new shoes (which are a gift to myself after the last round – a non-food treat – if you like). I was planning to get a new battery for my heart rate monitor but am going to ponder on that a bit more. I survived the first round without one and guestimated my calories burned from a Calorie King website (you input the exercise and your weight etc). I last used my heart rate monitor at fat camp) and on my return and recall (even now) how obsessed I was with the calories. We had to wear them all day and I became particularly adept at trying to work out how far below my calorie intake and BMR I’d gone, in terms of how much weight I could lose that week. I understand the pluses and recall my own joy later when I’d burn 1000 calories in a personal training session – and noticed how I continued to burn calories quickly afterwards – but for someone who can get overly obsessed with the numbers, I’m not sure it is a sensible thing for me to do. But I’ll see. Never say never.

In the meantime, I’ve circled the gym classes that appeal to me. I walked with girlfriends this week for the first time in six weeks, and we have agreed to go again weekly at a minimum. I’ll sign up for some pilates classes in the next week. And I’ll do something about those new shoes soon. So…. unless something unplanned happens, I’m well on my way to being much fitter by the end of this round; but hopefully also a bit more measured in my approach and better able to balance my commitments on this program with the rest of my life.