I may have touched on this previously (yes, you can read into that the fact that I’m too lazy to re-read old blog posts!) as it first came up in a mindset lesson as part of the weight loss program I’ve been participating in. During that webcast our fearless leader, Michelle, talked about strengthening the all-important willpower muscle. 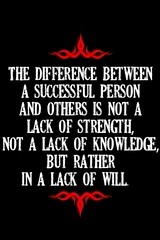 It was a month or two ago I think, but she had a couple of different takes on it that I hadn’t heard before (and believe me, when it comes to dieting I’ve been there and done that!). Firstly she talked about the benefits to lay-bying something; and she didn’t mean clothes or shoes. Obviously. Rather, when we think we cannot LIVE without chocolate or chips or some other less-than-healthy food option, we should ‘park’ that yearning for some time. It’s a bit of a variation on ‘taking your mind off it’ which you often read about. But I like the lay-by notion as it has less negative connotations attached to it. Now, I should admit here that I’ve never been a lay-byer. No siree. If I want that dress or those shoes and I can’t afford it, I merely put it on my piece of plastic and DAMN the consequences. Food’s been the same. I’m all about the instant gratification. I WANT WHAT I WANT; AND I WANT IT NOW! I’ve tried ‘substitution’ before, but it rarely works for me. Picture this: Devil me: I really want chocolate! Angel me: Don’t be silly. An apple would be just as fulfilling. NOT!!!!

I’m pretty sure I’ve even tried the lay-by option before and recall authors of books about eating disorders, such as Geneen Roth, talking about the ‘I’ll wait for a bit and if I still REALLY want it, I’ll have it’ mindset. I recall also her suggestion that we NOT try to replace the object of our desire, as we are likely to eat the apple and then eat the bloody chocolate anyway. I suspect, however, this isn’t the case for everyone. Those less-obsessive types or non-binge eating types are probably a lot better at moderation. But as for me… alas….

So, the notion of the lay-by appealed to me.

The other bonus of this as suggested by Michelle was that each time we say no or rather, not-yet, we are flexing our willpower muscle and thereby strengthening it. And slowly it will get stronger and stronger. I think it is almost akin to the several weeks they say it takes to form a habit. The more we use it, the better we get at using it.

Today is possibly a red-flag day for me. I’ve just ‘survived’ 5-6 days with my parents. And when I say ‘survive’ I don’t mean I survived them, but rather the temptations that I usually succumb to when I visit my parents’ house. Many a diet has gone awry following a break at ‘home’. I’m not sure what it is. My mother has a well-stocked pantry and even if she doesn’t have junk food, she has things I am prone to binge on. And… I think there’s something a bit tumultuous about returning to one’s hometown – the scene of the crime – if you like. I like to think I don’t hold onto a lot of childhood angst (my mother may disagree) but when I’m back there I’m a teenager again. I deserve treats and to be spoilt. Of course in reality I’m in my early 40s and go home to help mum and dad out… but the feelings are still there.

And – I did indeed survive it. Other than a piece of gluten-free cheesecake slice (my first sweet thing in 12+weeks) I ate the sort of things I have been consuming for the last 12 weeks of this program. I was worried as we are now in the off-season (pre-season actually) and in the pre-season before I started my first round of this program I didn’t even THINK about exercising or eating healthily. I waited until day one of the program and then WHAM – it was all go for me. But that’s not the plan this time around.

I held strong until yesterday when I caught the aroma of a cake my mother was making. OMFG. I don’t even like cake, but suddenly I was hungry. “I thought you didn’t get hungry anymore,” my mother said when I told her. “Hmph!” I said and went for a walk, cooked dinner and stayed on the straight and narrow. Mostly. Mid evening I told my mother I felt like a treat. I had all sorts of justifications… I said that it was better if I indulged while there as there’d be someone to stop me going crazy. And if I was at home (alone) I’d have to buy something and eat all of it. “I’ve got choc bits,” she said. Once upon a time I would have poured myself a huge bowl of milk chocolate, dark chocolate and white chocolate ‘bits’ and perhaps swirled around some Vaalia Lemon Creme yoghurt and scoffed the lot. And had seconds… (yes, I’m sure you can tell I’ve done it before – how else could I be that specific?!). BUT I DIDN’T.

“No, it’s okay,” I said to her. And I held firm. To my surprise I’ve lost about half a kilogram since I went home. But I’m now back in my current hometown and it’s a public holiday. But because the treat-notion has been circling my mind now I’m incredibly tempted to go and buy something. I haven’t had my beloved corn chips for 12+weeks. “Surely,” I say to myself, “ONE packet wouldn’t hurt.” But… the sane part of me – flexing its willpower muscle – wonders if one packet will lead to another. In the past I’ve fallen off the wagon in a huge way and struggled to get back on. So, instead I’m telling myself I will go to the supermarket that does not stock my corn chips. And… later, I will have some popcorn if I really feel the urge. Not entirely healthy (as I use butter), but it isn’t a danger food for me. I’m not likely to binge on it and I can usually fit the calories into my daily limit.

So… I’ve identified it’s a red flag day for me, but I have a plan. That’s a big deal for me, and even writing about it now has hardened my resolve. And… I will remember that I need to keep strengthening all of my muscles if I am to become the person I would like to be.