I’d half-written today’s post with plans for finish it off at lunch and upload it, but my mind has been occupied with something else, so I decided to put fingers to keyboard to get it out of my head, lest it explode. My head, not the keyboard. Obviously. 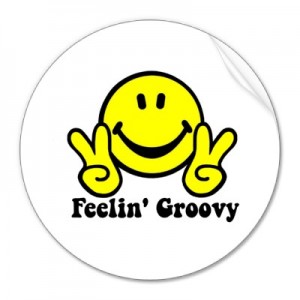 I only live about 4km from the city (less than a 10min drive on weekends), but my train takes an indirect route so the commute takes about 30 minutes each way. Today we stalled a few times, presumably queueing at several stations along the way. It gave me more time to finish my game of iPhone Taipei and tweet to and fro with those also on my 12 week challenge.

All the while I had a line from a song going through my head…. Ba da da da da da da, feelin’ groovy (The 59th Street Blues by Simon and Garfunkel apparently). In reality it was just the feelin’ groovy bit that I was mentally singing. Frankly it is a relief to have Wendy Matthews’ The Day You Went Away out of my head (am writing about why it is in my head in my other blog).

I’m not naturally a joyous person: a fact you may have gleaned from my other blog posts. I think I used to be. I used to be vivacious and upbeat…. I think. Now I just fake it pretty well. I have to be ‘on’ in my job. People comment on how I’m always smiling and seemingly laidback. If only they knew how bitter and twisted I really am (I’d insert a smilely face here if I wasn’t vehemently opposed to smiley faces)!

But, I realise how much of my mood is tied to my self-confidence and self-consciousness at times like this – ie. when I am dieting. Two weeks into this weight loss challenge and I’m yet to go over to calorie limit. I’ve been exercising 6 days’ a week as required. I haven’t eaten ANYTHING that even vaguely resembles (what I would call) junk food. Indeed, the most decadent thing I’ve done is have potatoes on a couple of evenings each week, oh, and a vanilla diet coke after boxing on Saturday (consumed while lolling in bath reading the Saturday paper).

I was stoked with my 5.2kg loss over the first 9 or so days. I jumped on the scales on Saturday (yes, I know I said I wouldn’t!) and had lost another kilogram, which helped keep me really focussed all weekend. Sadly for me it is ‘that’ time of the month and half of that kilogram has re-appeared. I know I can’t have gained weight. I actually (inadvertantly) had less than 1000 calories on Sunday and Monday, so I know I should be still losing weight…. but I feel surprisingly zenlike about the numbers on the scales even though weigh-in is tomorrow (and it’s highly likely my fluid retention will get worse before it gets better).

So, why am I ‘feeling groovy’? Because I know I’m doing all of the right things. I’ve been here before, last time I did Weight Watchers. I felt great because I knew I’d been sticking to the program. At the time I told myself that the scales and the numbers shouldn’t matter.  Of course when the time for my ‘weigh-in’ came, I was devastated that the numbers didn’t reflect my hard work. I blogged last week twice (here and here) about my obsession with the numbers. I am trying hard to fight that this week. I’m telling myself what matters is that I am feeling healthy and strong (mentally).

Today (as I sat on the loo – yes I know, too much information!) I looked at myself in the mirror in front of me. I’m not one to primp or preen in front of mirrors, so only tend to glance at my reflection when caught unawares (or on the loo with nowhere else to look!). But today I noticed a difference. There was a bit more definition around my face. I could kinda see my jawline was a bit more prominent – and less lost in a double neck (as opposed to a double chin).  And, although it was 7.30am, I’d already been to pilates and was feeling more alive and awake than I usually would at that hour, which could account for viewing myself in such a positive light!

And then, as I walked to the train station, I felt myself sucking my stomach in. And I could! When I’m feeling really fat and bloated I can’t hold my stomach in – even if I’m doing a lot of pilates and working my abdominal muscles. I doubt my stomach is significantly smaller than it was two weeks ago, but it’s nice that it feels that it is.

So, when I weigh in tomorrow I will try to not worry about the numbers. I will try to remember that I’m feeling good and that’s all that matters. As Simon and Garfunkel say…:

Life, I love you, all is groovy!