In Sunday newspaper’s Body & Soul magazine, there was an article about how women constantly denigrate themselves and their bodies.

The article talked about the factors which fuel our negative self-image to the extreme of self loathing and included some suggestions to turn our thinking around. Some of the suggestions reminded me of the mindset discussions we have had as part of the 12WBT weight loss program I’m participating in. Our leader, Michelle, is always talking about the language we use, and I’ve written about that before. She’s commented on the fact that we talk about ‘good’ food and ‘bad’ food, and label our own behaviour similarly. It results in connotations being attached to our food and behaviour which are highly subjective and emotive: Chocolate is bad; Alcohol is evil; Apples are good. Despite being more aware of my own thought patterns, I still do it. “I’ve been good,” I say when someone asks me about my diet. 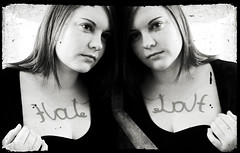 The article also suggests we replace self-loathing with self-love. Again this is something we talk about on our program: being the best version of ourselves. A while ago I offered a wanky quote from a notebook which reminded us that we should be ourselves, as no one else can do it better. I was blogging about a conversation with a co-worker who chastised me for my negative view of myself. I hadn’t even noticed I did it, so accustomed am I to self-deprecation. I have also written about a workshop I attended where the facilitator commented our habit of negative self-talk and an aversion to boasting about our own capabilities. It’s ingrained in us from a young age… it’s not polite to behave in a self-congratulatory way, or to brag.

The article quotes dietitian and co-author of The Good Enough Diet, Tara Diversi:

“Girls as young as five have strong ideas about weight, such as fat is bad and skinny is good,” she says.

So these thought patterns are ingrained early and reinforced by contributing factors, such as our parents’ body image and messages we may get through the media.

The article offers another suggestion to combat our body obsession: to acknowledge and be aware that there are many healthy body types. Thin isn’t necessarily healthy; and overweight isn’t always unhealthy. I know many people of normal weight or even those who are slim who do no exercise (and never have), don’t eat well and suffer from ailments. I know of bigger people who exercise like demons and have perfect cholesterol but still have a bit of a belly or larger thighs.  And yet – I have to admit it – I think I’d rather be skinny and unhealthy, than fat. It comes back to our use of labels again: fat is bad, skinny is good. Good, bad. Not healthy and unhealthy. 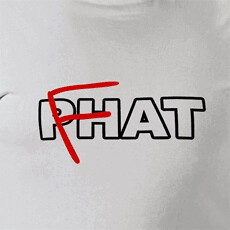 When my much-beloved niece was 3 or 4 years old I was one of her favourite people. One day she got home from daycare and wrapped her arms around me. “I love your fat tummy,” she said. She then preceded to tell me that her daycare teacher had a fat tummy as well, but it had a baby inside of it. OBVIOUSLY I wasn’t going to be upset with my niece for such a declaration; instead it got me thinking. I realised she wasn’t using the word ‘fat’ in a negative or derogatory way, just as a descriptor. To her (at that age) there was no negative or positive connotations attached to the word. It described me (or my stomach in her opinion) just as blonde would have described my hair.

When I lived in Africa I was congratulated by women in my organisation for putting on weight (they’d beam as they told me I was ‘getting fatter’). I was mortified, but they saw it as a good thing. Similarly in Cambodia, I was perceived as wealthy because of my size. I was sometimes called Mrs Big (in Khmer) and I don’t believe that it was meant as an insult. But I – obviously – took it that way and was a bit hurt every time someone made the comment. I’ve read enough self-help books and have been exposed academically to the notion that only WE are responsible for our own feelings – that WE have control over how we react to something. But, just because you can rationally understand something, doesn’t mean you can overcome your responses and feelings. After all, our attitudes and beliefs have been formed over a very long time…