Just when I thought I was very mentally healthy when it came to my exercise regime (unlike my relationship with food!), I’ve found myself struggling a bit in the last couple of weeks.

I’m overanalysing decisions I’m making and there’s a sense of guilt lurking somewhere just beneath that conscious and active part of my mind.

There I was merrily gymming four or five times a week with minimal thought given to the need to burn calories. My gym routine had become a habit.

Sure, there was the occasional glitch: a sick day; or work meeting impacting on my attendance but it was never a ‘biggie’ cos I’d be back on the horse in the gym the next day.

Until two weeks ago.

I had a cyst cut out of my back. I’d had it for ages, but as it was right near my spine and had grown, it annoyed the crap out of me. So, after over six months of ‘meaning’ to do something about it. I did.

The said cyst was removed and resultant hole stitched up, and I was ushered from my doctor’s surgery with minimal fanfare.

But I’ve been shocked at the impact it’s had. I took a few days off exercise before returning to adapted gym classes. Because of the location of the stitches I couldn’t lean on things and lying on my back was painful. Any movement stretching my upper back hurt, as did taking deep breaths.

I soon discovered why as when the stitches were removed on the weekend, we discovered the wound was infected. Hence the excessive pain.

My infected wound was treated with antibiotics and I was sent on my merry way, with promises to keep the wound dry until (next) weekend.

That alone makes exercising hard because if I exercise ‘hard’ I’m likely to sweat. A lot.

So, after easing off over the last two weeks, I’ve skipped two Zumba classes and a Pump (weights) class since having the stitches removed. I did get myself to the gym yesterday for a bit of an interval session on some cardio equipment and I should go and do the same today. But….

I find it boring, which is why I’m a group class-kind-of-gal.

But… when I contemplate the notion of skipping gym (and exercise almost-completely) until next week I’m overwhelmed with guilt. I’m not sure if exercising too soon caused the previous infection. The doctor suggested I could have been allergic to the stitches. But of course I’m erring on the side of caution, telling myself I don’t want to exacerbate the wound until it heals properly.

Naturally however, on the other hand I’m wondering if I’m just being lazy. “If I was really committed to exercise,” I’m telling me, “I’d be on the exercise bike or treadmill, or something.”

Sane Deborah is telling obsessive Deborah that in one more week her back should be as good as new and reminds her that she herself has told others not to overdo it if they’re injured or ill.

But naturally… obsessive Deborah (driven mad by her inner critic, Myra) is catastrophising and telling herself she’s completely fallen off the exercise wagon. “The end is nigh,” says obsessive Deborah, nodding knowingly as if she’s been expecting this fall from grace.

But I’m obviously ‘evolving’ in some way, because after pondering on this and stabs of guilt I’m telling obsessive Deborah and her buddy Myra to get the f*ck out of my head. These are just a couple of weeks out of my life. I have a bandage on my back and some accompanying and lingering pain. No more second-guessing myself. Sure, I didn’t go to the gym today (couldn’t bear the idea of the cardio equipment for two days in a row), but you know what….?! I’ll go tomorrow. And perhaps Friday I’ll see if I’m not-sore enough to do a circuit class or similar. 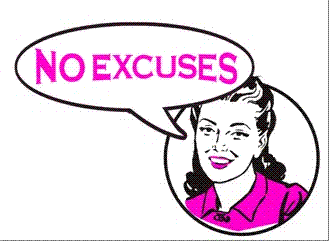 I’m not the person I used to be – who looked for any excuse to avoid doing what I knew I should do. I’m better than that. I’m stronger than that. Next week, I’ll be back. With bells on, and all that!

Have your workouts been derailed by injury or illness? Have you been able to get them back on track?