I was going to call this Post Hoc, Ergo Propter Hoc but the title I’ve used is an abbreviation of that. Apparently. It’s a phrase I only know from watching The West Wing. I don’t think it’s actually the right phrase for what I’m trying to say here, but the only other one I can think of is something from the lessons we had at school when computers were first being introduced in the mid 1980s… IF <something> THEN <something else>. Clear as mud?

Which doesn’t bring me to my point which is actually about exercise, fitness and ageing.

I started going to over-50s exercise classes a couple of months ago. My main motivating factor was that they were being held IN MY SUBURB…. or at least the neighbouring one. Small group, low impact, inexpensive. So, perfect.

It took me a couple of weeks to get myself there. Even though we weren’t COVID-riddled here there were still restrictions so we need to book in, take our own hand weights etc. The classes are low key and held at an old hall (or outside under a shelter). 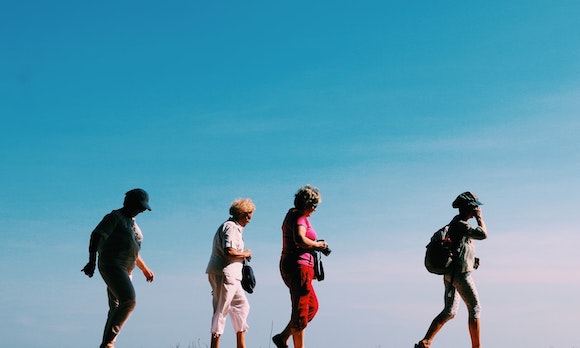 Interestingly I’m one of the youngest there. I think most participants (mostly women but a couple of men) are over 60 and probably closer to, or over, 70. The other not-so-fun-fact is that I’m also the biggest (or one of the biggest there). Most of the others are quite slim or have skinny legs and that slightly ’rounded’ body that seems to come with menopause, ageing or having kids etc…

I don’t feel self-conscious as such, but I confess to a sense of envy that these other women don’t struggle with big thighs, fat knees and bouncing boobs. Many of the women talk about aqua aerobics and gardening. They’re often absent from classes for jaunts in their caravans and I get a sense they’re very active.

Several weeks after I started classes I ventured to the local shopping centre during a busy time*. And, I saw a lot of women my age or older who were very big. Very unfit. Unhealthy looking. And because I’d convinced myself I was surrounded by older, fitter and healthier women I noticed this was (in fact) not actually the case.

And logically of course I knew that. That there were a heap of overweight, unhealthy older people… perhaps even worse than moi. It was just that—for a while—I wasn’t seeing any.

It seems kinda obvious now as I ponder exercise, fitness and ageing. I realise the group of women who attend my exercise classes are not representative of ‘older women’ in general. They’re there because they’re committed to their health and fitness. They’re not-overweight because they exercise. They (we) may only be ‘marching’ not running and doing pushups against walls rather than on the ground, but they’re there. It’s not a coincidence I realise. But some sort of causality (IF…. THEN!). And I remind myself there’s a lesson there.

I should mention I’m injured at the moment and I am so paranoid about my motivation or loss of momentum that I kept going after I first hurt my achilles tendon, worried I was using it as an excuse to be slack – which of course made it worse. I’m determined however to only take a week or so off to recover however and get back into it…. inspired by my older, healthier exercise buddies.

Are you an exerciser? Are you consistently active or are you like me… exercising in fits and starts when trying to be healthier?

* I usually go late or early when no one is around.