As regular readers would be aware, my moods have been a bit screwy of late.

When I’m grumpy or stressed I simmer. I rarely erupt – overtly anyway. Mostly my rage is turned within and I retreat and binge eat.

The simmer is my broken window… it’s a warning sign that things are going / about to go awry.

I’m currently staying with my mother who had a hip replacement three weeks ago. She had a week in hospital so we planned that I’d mostly stay at my place and travel the 40km to her place / the hospital on a daily basis to visit. But… she wasn’t as well as expected and I started to struggle traveling between the two locations: attempting to keep up my commitments and be on hand for mum in hospital. After starting to get angsty (grumpy and bitchy) I made the call to just stay put at her place and my stress receded. A lot. 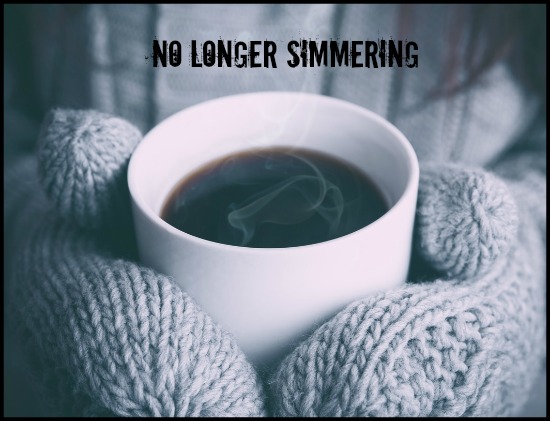 My mum can’t actually walk for another three-four weeks. She’s on crutches so can’t bend over (or dress herself etc).

I don’t think I’m naturally a nurturing / caring person but I’ve been trying to be very patient  and kind – with mum and her many visitors – but I’ve had my moments. This time last week everything was pissing me off. I was grumpy. I couldn’t settle. I retreated into myself and was wound so tightly I was ready to blow at any moment.

I’d had a couple of short breaks – gone walking or grocery shopping when she had visitors but had tried to ensure she always had someone around lest she drop a crutch or fall.

But a week ago a friend arrived to take me out. Mum was more than happy to fend for herself for a few hours. And when I arrived home (after a business networking function and dinner) and found mum unscathed I was relieved. As was she. Her confidence had grown. The following morning she got herself out of bed and made her own breakfast.

And as she realised she was increasingly mobile and again more independent, she decided she was well enough to allow me to have the occasional day or night at (my) home.

When she first suggested I have some time at my place I felt  guilty as I suspected my need for a break was way too obvious. I berated myself for being such a bitch and not being more tolerant. “Why oh why, was I not naturally a sweet person,” I wondered?

However, after observing her with her friends and getting about I realised that it’s not just the escape of my inner bitch that led to her suggestion. In fact, I understood that she was as as keen (as I) for her space and independence.

Still…  I worry it’s not normal to feel so antsy. It’s not like I’m uncomfortable at mum’s as her place is also kinda ‘my’ place. It’s my childhood home. And Mum and I are close… so it’s really not a chore to be here. I can only think my stress and inability to cope is seriously because I am a bit of a self-centred bitch and WAY too accustomed to being alone.

Are you a simmerer? Do you erupt?
Have you had to be away from home for any length of time? (That didn’t involve a holiday!)