I have been pondering on something and hope in my heart of hearts (actually I don’t really know what that means… I just put it in cos it sounded good and seemed to fit!) that others are able to relate to the tale I’m about to tell and perhaps put me at ease – that I’m not completely fucked in the head – by sharing with me that they too experience the same thing.

I must admit, you see, I’m often relieved when I confess to some unusual (read: obsessive, weird, fucked-up) behaviour and receive comments from readers telling me that they do or experience the EXACT THE SAME THING. 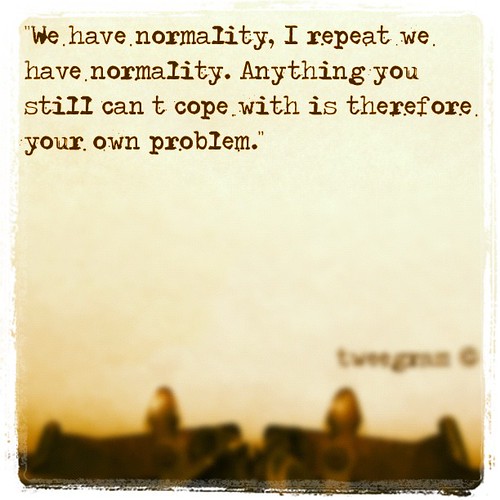 It’s not that I revel in others’ misfortune (really, it isn’t!), or want others to share in whatever despair I might be suffering as a result of my ailment… rather, it’s kinda nice to know that it ISN’T JUST ME! It’s reassuring to know that I’m not completely a lost cause. In fact, it’s a relief to know that I’m thinking the worse (catastrophising yet again!) because I can only access my own head; my own mind; my own thinking… and often judge myself harshly.

Readers of this blog and followers of my tweets and the like will know that I hired an exercise bike for a while earlier this year. It was a necessary evil back when I couldn’t walk without getting shin splints and was too unfit for much else. But I hated the thing. I dreaded getting on it, although once on I could usually force myself to stay on for the 20-30 minutes required.

Similarly, I’ve recently tried to recommence a ‘learn to run’ program; but I hate it. Hate hate HATE it. So much so that I spend the day at work dreading the time that I need to go to the gym and climb aboard the treadmill and commence my ‘run’ (using the term loosely!).

I do, however, manage to get myself to gym classes without too much antipathy… so I”ve been telling myself that my problem with the bike and treadmill is that I dislike cycling and running.

But, here’s my problem…. (FINALLY, you’re thinking… Yes, I can be a bit long-winded!) 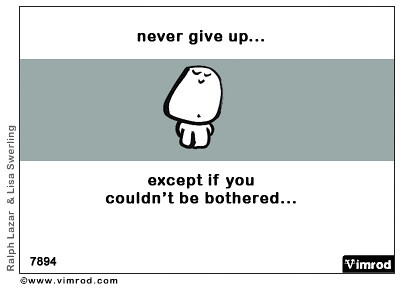 While I’ve been in my hometown and now at a nearby beach town, I’ve been walking. Yes, walking! Those rabid runners amongst you may well scoff at walking as a form of exercise BUT, I figure at least I’m doing something to burn off the myriad of calories I’m engulfing in alcohol and unhealthy food!

Generally I don’t mind walking, although I don’t do it much for exercise in my normal life (given my weekday gym class options). But when I do, and while on holidays, I don my iPhone and pound the pavement in time with LMFAO, Usher, Pitbull and others (which occasionally can be a challenge, when you’re a bit of a perfectionist who takes long strides and the beat of “Sexy and I Know It” is pretty bloody fast!).

But, here’s my problem (yes, I’m finally getting to it). I’m suffering some motivational problems. No… worse than that, I’m finding myself really DREADING my walks.

Yes indeedy. Unless I get up and go first thing (which I’ve done as often as possible) I spend the day DREADING my walk. I realise it isn’t the walk itself… it’s the HAVING to go. Yesterday my mother and I arrived at a nearby beach and lazed about on the verandah of a lovely house opposite the ocean. I had a little afternoon nanna nap (well, it was quite possibly over 2hrs long in all honesty)… and yet despite being surrounded by serenity and beauty, all afternoon I had this niggling feeling in the back of my mind because I knew I (yet) HAD to go for a bloody walk. It was hot and humid earlier in the day so I was waiting until it got cooler – which didn’t help – because I had a mostly-legitimate reason for delaying the inevitable, but longer to experience the aforementioned dread.

It was still hot at 5pm, so I told my mother that I was going to skip my walk and sit down with some champagne instead. After all I was on holidays, I told her huffily. Also, I said, I would get up early and go tomorrow when it was cool. Knowing me as she does, she just nodded and agreed, all while doing a mental eye-roll and thinking to herself, “WOT-EVA!” (Well, she would have if she was a teenager! I suspect that she’d actually zoned out my obsessive ‘I must go for a walk’ bleating hours before!)

No sooner had I decided this, that the guilt started to gnaw away at me. And finally, half an hour later I reappeared in front of my mother in my exercise gear announcing I was going for a SHORT walk. 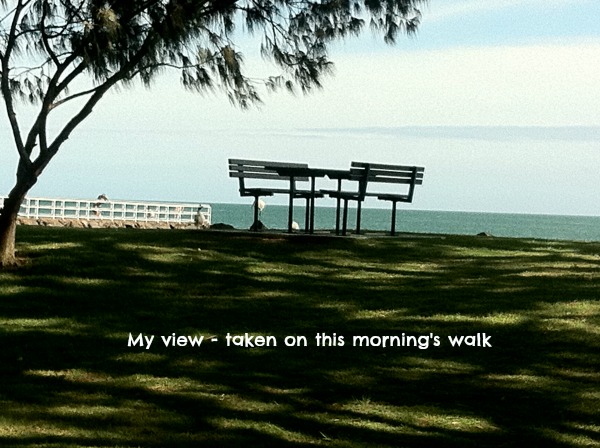 Naturally the walk was fine and I felt a huge sense of relief and accomplishment when I finished. Similarly, I did an earlier morning walk (not 6am as planned, but 7.15am!) today and am relieved it’s done and dusted and out of the way.

The sense of dread isn’t a new one to me. I experience the same thing when I have ANY unwanted chore or task before me; and it plays on my mind (plagues me, may be a better term) until it’s completed.

But what I don’t understand is how I can DREAD the walks so much – particularly here where there’s a long walking/cycling path along the esplanade! But I’ve been the same since I came away on holidays. It plays on my mind ALL DAY until I get it done. I can’t enjoy other things as there’s this niggling sense of duty or something that lurks in the recesses of my mind. I could understand it if I was having to do some exercise I disliked… but walking can be cathartic. It can be hot and sticky and my shin splints have been playing up too… but it’s not something that causes nightmares or induces vomiting.

So, what I’m wondering is…
Is this normal?
Do others experience this sense of DREAD or OBLIGATION when it comes to exercise, even if it’s something they don’t actually dislike?