I did something on Monday that I vowed I’d never do. And no… it wasn’t some weird sexual act that is illegal in some states. Or anything else illegal for that matter.

I did a double session at the gym.

Yes, there you have it. Confessions 101. For many-a-year I have secretly (or not-so-secretly) scoffed at those (other than athletes or those in the fitness industry) who do a couple of sessions at the gym each day.

I know that sounds terribly judgemental (who, moi?) and I am generalising IN A BIG WAY, but over the years I’ve known many people who have exercised obsessively, only to crash and burn shortly after starting. I have a close friend who regularly embarks on multiple-daily gym sessions; usually a pre-work and a post-work gym session for a period of weeks or months… which is regularly followed by no gym sessions at all, as well as much guilt and angst.

Over this past year, I’ve come across lot of people who regularly do multiple sessions a day at the gym; which I’ve always thought a tad obsessive if your life doesn’t revolve around the fitness industry and you aren’t training for a specific event.  But… before you start to throw rotten fruit at the screen or shut me down in horror, let me explain my reasoning. It does make sense, I swear! (Trust me. I’m a blogger!)

As you know, I like to think I’m pretty self-aware when it comes to my beliefs, attitudes and thought patterns and the like (aka: prone to overanalysis!). When I respond or react to something I often question the reasoning behind it. Do I have some hidden or unconscious agenda? Am I projecting? As a result, I’ve often questioned my reaction when I’ve heard about people doubling up on their gym sessions or doing multiple sessions in a day – on a regular basis.

Has it been guilt, I’ve wondered – particularly in the early days when my training was significantly less arduous? Or guilt because I’m not prepared to allocate more time to exercise, preferring instead to write or watch TV in my non-work hours? Or is it envy or jealousy – that I’m not fitter or motivated to spend more time exercising?

But the more I think about it, the more I realise that my ‘gut-reaction’ in relation to others’ exercise habits is about my own fears. Obsessive by nature, I’m exactly the sort of person who adopts an ‘all or nothing’ approach. As a former anorexic I once spent MANY hours a day exercising. I skipped school to do sprints on a basketball court. I ran on the spot in my college room for hours on end and danced about my bedroom to Madonna and Michael Jackson while in high school, for calorie-burning purposes rather than fun.

Given that I (eventually) went from a 47kg girl, to a woman weighing 130kg, I didn’t obviously sustain those energy levels.

If anyone reading this is over 30 or 35 years of age, you may remember the movie, When Harry Met Sally, from back in the day when Meg Ryan was still everyone’s sweetheart (before Russell Crowe and the horrendous movie with Hugh Jackman, not to mention some unfortunate plastic surgery). 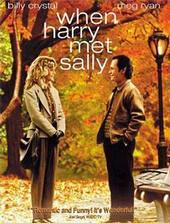 In When Harry Met Sally Billy Crystal’s character, Harry, tells Meg’s character, Sally (obviously), that he or his wife never go to see each off at the airport. Because, he said, it’s something you do when a relationship is fresh and new… but as time passes and other commitments intervene, you stop. But, he said, you are constantly conscious that ONCE UPON A TIME you / they cared enough to do it, which is no longer the case. Well, I think he said it better, but that’s the gist.

I think the gym stuff is a bit like that for me. I know others may put in mega sessions when training for something or on a rare occasion, but in my (vast) experience, having seen many-a-friend crash and burn – it’s one of those things that often can’t be sustained.

And I like to think I’ve learned from others’ mistakes. Given my tendencies to obsess and suffer guilt, I’m hoping that by pacing myself I’ll be less susceptible to burn-out.

But… having said all of that, on Monday I did it. I ‘doubled-up’. I think it was partially in response to some evilness on the weekend (caramello koalas: damn you, you pesky temptresses!) and work being a bit quieter. I’d driven into the office ultra early and spending 2hrs at the gym at lunch meant that the day didn’t seem quite as long. Plus it’s nearly the silly season and my being-at-work motivation is starting to wane.

I contemplated the notion prior to going (given all of that highly-scientific analysis above!). The first class was Zumba and it’s my favourite – which you may have guessed from my obsessive tweets and posts; followed by a circuit class. Originally I was going to see who was taking the circuit class before deciding, but as it happened it was someone who’s sessions I’ve never been to before, so I bit the bullet and went. It was – actually – bloody hard in parts, but enjoyable nonetheless and an excellent mixture of strength and cardiovascular activity.

As you’d imagine I felt quite chuffed with myself for the rest of the day and less angsty about the weekend’s caramello koala debacle (as per yesterday’s post).

And yesterday, I was due to undertake one of my C25k runs, but as lunch approached I did briefly consider heading to the gym for a Pump class BEFORE my run… but as I’m scheduled to do Pump today (Wednesday) and thinking again about the possibility of crashing and burning I decided that moderation was – indeed – the best option for me at this time. In all things.

What do you think? Is moderation always important? Am I being too harsh about double gym sessions?