This post is brought to you by Nuffnang and Vitasoy.


Around the same time as my coeliac diagnosis my doctor casually dropped into the conversation the fact that I was lactose intolerant.

It was something I ignored for the next seven or eight years while getting my gluten-free eating under control. I wasn’t a huge consumer of dairy food so I wasn’t terribly concerned, plus my mind was sufficiently blown trying to give up barley, rye, oats and wheat!

However, after a doctor’s visit last year about ongoing stomach upsets I realised I needed to make further changes and started investigating traditional dairy alternatives.

You’re probably aware there are a range of alternatives to cows’ milk, including almond milk, oat milk and rice milk; however in terms of plant-milks, soymilk is nutritionally superior cos it’s higher in protein and contains all of the essential amino acids (which is a good thing… in case you were wondering!).

My local bestie’s son is dairy allergic (as opposed to lactose intolerant like moi) so she’s well versed in options available and serves ‘Pickle’ Vitasoy with added calcium. The (now) 2.5 year old is just progressing from babyccinos to hot chocolate and is (understandably) in toddler heaven. 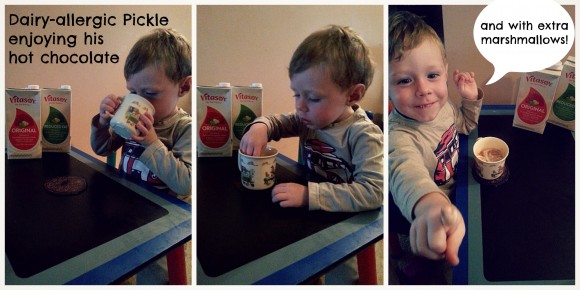 Vitasoy’s ORGANIC BEAN soymilk range is made from organic whole soybeans (ie. not processed powders!) which are grown here in Australia*, and importantly – they’re not genetically modified. It’s what Vitasoy DOESN’T do that matters!

I had some recipe cards delivered to my mother’s and before I could pick them up she decided to try a couple out herself. (As you do. Well… if you enjoy cooking – which she does! I’m thinking that gene must skip a generation!)

The Crunchy Crust Kale Pasta Bake (above) was a huge success, although I must admit I’m still kinda offended she didn’t make it gluten-free (with GF pasta and GF breadcrumbs); but she likes to try new things for dinner guests, so others got to enjoy the fruits of her labour. Although I should confess that she left out the kale.  (Some things obviously DON’T skip a generation! 🙂 )

I didn’t say “Well duh,” but was tempted. 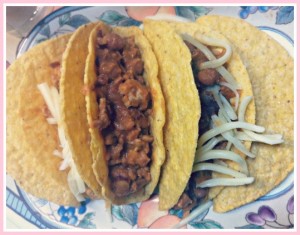 We also tried the Easy Vegan Bean Tacos recipe, which interestingly involved adding Vitasoy to (partially blended and cooked) four-bean mix, onion, garlic and spices, before returning it to the stovetop. Initially I wondered why on earth we would add milk… but then realised it gave the beans a smoother texture. Incidentally… we added tomatoes and chicken mince to the bean mixture, which was tres yummy, so the whole vegan thing kinda went out of the window! #oops

I’ve got friends who are a tad pedantic about their milk. They prefer trim to skim or only drink the full-cream stuff. This has never been an issue for me. I’m also fine with either fresh or long life milk. In fact, because (in summer) I don’t use as much milk, the option of long life is preferable. In winter however, I’m partial to a pre-bed hot chocolate.

When I first started changing my dietary habits I wasn’t sure how I’d cope with soymilk. But, I easily adapted (just as I did going from full-cream to skim years ago). I also think it’s possible to learn to accept or enjoy new and healthy tastes when sufficiently motivated.

I joked about it before, but my mother’s comment about Vitasoy being like ‘real’ or ‘normal’ milk was interesting. I think there’s a perception that alternatives cannot be used in the same way as milk that comes from cows. However, this isn’t the case, and it can be used on cereal, in coffee or smoothies, as well as in recipes. Indeed, there are stacks of great recipes you can check out on the Vitasoy site.

If you have allergies or predilections there’s also a groovy little table on the site which sets out all products and allows you to filter your requirements: lactose free, dairy free, vegan, vegetarian, low GI, low fat (and so forth) to identify what’s best for you. 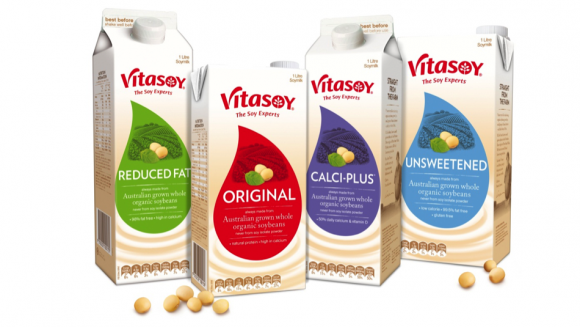 Excitingly for my readers – especially those who want to try something different, or for those with allergies – I’m running a competition to the value of $150 (RRP), which includes:

Full terms and conditions can be found here. UPDATE – THIS COMPETITION IS NOW CLOSED!

*You can actually see the farms they’re grown on via the Vitasoy website… if you’re into that sort of thing!

And because it’s Friday I’m flogging my blog With Some Grace.