Clothes make the man. Naked people have little or no influence on society. Mark Twain

It’s Fashion Week here in Oz this week – well, in Sydney anyway. Nevertheless, given my expertise and excellent taste (not!), I’ve written in my other blog about fashion and thought I should do so here as well.

It’s quite timely as I’ve been thinking a bit about the book I mentioned ‘If Not Dieting, Then What?’ by Dr Rick Kausman. As well as all of the important stuff (!), I had a chuckle as I came across one of his patient’s anecdotes – about her experience when she first joined a gym.

Now the book was written in 1998, but it occurred to me that many of her concerns are still relevant today. But not all. She commented, for example, on how confronting it was to be faced by thin women in neon lycra g-string leotards.

Other than that very tragic relatively recent film clip (Call on me, by Eric Prydz – picture below), I don’t think leotards have made an appearance in a gym for a while. (And I’ve got my fingers crossed that the look never returns. Leg warmers – okay, lycra – hmmm…. maybe; but g-strings in public – not so much!) 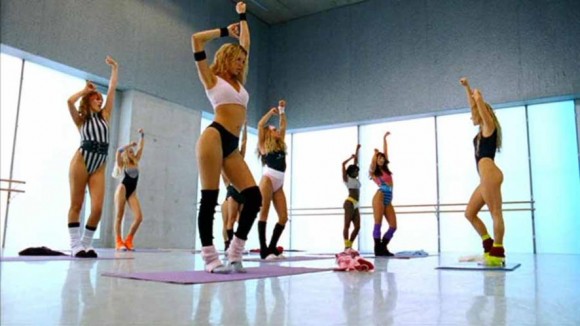 Tragic 1980-90s gym wear aside, even now I can still imagine that many suffer some angst when joining a gym after a hiatus. It’s one thing when you’re exercising on your Wii Fit with only your toddler to witness the inept sports bra and baggy pajama pants, but what happens when you need to actually exercise with others? In public?

As I’ve exercised (albeit) on and off in some form for most of my life I wasn’t too worried when I joined a gym last year. And, for the past 6 months I’ve basically been wearing the same thing I wore when I exercised in preceding years.

I’m a big fan of the large baggy t-shirt and I own quite a few of them. I prefer Nike – not sure why, although perhaps it’s a size thing cos the men’s XXL (or XXXL) is baggy enough even for me. I also wear legging things which I wore even 20-25kg ago, rather than loose tracksuit pants. This is predominantly an issue of comfort. Tracksuit pants can ride up between your thighs if they’re ample enough (the thighs, not the pants – and mine are). Leggings just stay there. They don’t move. Another benefit is that they don’t allow a lot of wobble. So, if I’m running and dancing about madly I know the excess fat may be wobbling, but it’s minimised by the fitting pants. And because I wear big t-shirts that come down to my thighs, I don’t have to worry about my middle section or butt being visible! 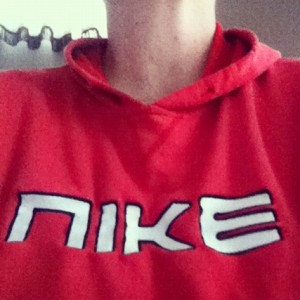 I love the arrival of winter because I can don my most favourite piece of clothing. I bought this Nike hoodie (right) 8 or 9 years ago. It’s huge. It was huge on me 20+kg ago and it remains huge. It is now, however, somewhat faded and has a few faint stains, but…. I. LOVE. IT. In fact, I may mourn it when I eventually have to give it up!

I must confess, however, that I do aspire to a new wardrobe for the gym. And no, I won’t be wearing little bra tops and shorts. Instead, I like the idea of just removing the baggy outer layers. In summer I look with envy at those who wear sleeveless tops. I think how much cooler they must without thick annoying sleeves and an added layer (and I don’t just mean fat!). And I envy other women’s ability to wear short t-shirts or singlet tops and not have to worry about their bulging stomach or what their midsection looks like. Imagine that?!!! (Frankly, I cannot!)

Don’t get me wrong. I’m actually not overly angsty about what I look like when I work out. I perspire. A LOT. So I rarely look decent when I finish exercising anyway. And I don’t care. I grew up playing a lot of sport and it was more about the comfort than the look.

It still doesn’t stop me looking wistfully at others in my gym sometimes. Hoping too that one day I can strip off my outer layer. (In more ways than one!)

What do you wear when you exercise?
Do you care?

PS. There’s still time to vote for my blog in the Sydney Writers’ Centre 2012 Best Blogs People’s Choice Award, if you care to. You just need to click the button on the right hand side of the screen.