In my last post I talked about a book I received from my mother for Christmas and the fact that even the first chapter of the book hit home.

The Happiness Code, by Domonique Bertolucci offers up ten keys to happiness. I have actually read the second chapter and it was to be the focus of today’s post, but instead I thought I’d share some (personal) struggles and how I’m trying to actually ‘walk the talk’ for a change.

The first key was about the principle of choice and CHOOSING TO BE HAPPY.

And… amazingly I’ve been trying. I’ve avoided playing the victim and am reminding myself that I should be very thankful for my ‘lot’ in life. And as for the negatives… like Bertolucci says, they really could be much worse.

I was going to (and may still) write a ‘goals for 2013’ post in the New Year. It won’t surprise anyone that one of those goals will centre around losing weight and getting fitter. In the past I’ve always talked about my reasons, many of which have been external: others judging me, men finding me attractive, finding decent clothes. Etcetera.

But, I’m finally starting to want to make changes in my life for my own benefit (if that makes sense!). At the moment I feel unhealthy. Incredibly unhealthy. I talked late last year about feeling bloated and blah and that’s only gotten worse over the last month or so. I just feel uncomfortable. And – in all honesty – self-conscious. (So, it is A BIT about others!) 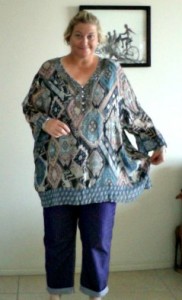 My old clothes (from just 3-4 months ago) were feeling tight so I’m only brave enough to wear loose stuff. I bought a couple of sets of new clothes for summer (although possibly overestimating my weight gain – left!).

(Note that ‘likers’ of my Schmiet Facebook page have already seen these photos as I had a ‘what jewellery should I wear’ moment when first donning the outfit!)

And… just yesterday (on my birthday) I wore it to lunch with some old school friends. By the end of lunch my purple jeans were so tight I could barely move. 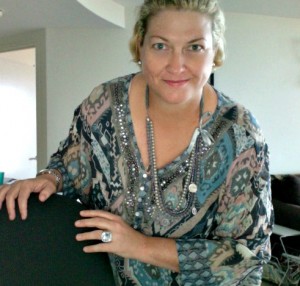 I then went for drinks with another friend and her gorgeous 16mth old son. He’s a bright and energetic little thing and kept tapping my leg or grabbing my hand to follow him around the pub. Each time I had to get out of the chair I struggled. My pants cut off the circulation at my waist and my stomach felt gi-normous. And I was a sweaty mess. It was not a pretty sight.

The birthday I celebrated was my 45th.

Just two weeks before I’d had drinks with others in my new complex (they’re a very social bunch!) and one of the men commented that he’d assumed I was over 55. What. The. Fuck?! I was freaked. For days. (Until a friend talked me down off the ledge.)

But… I said I would ‘think’ happy, ‘act’ happy and ‘be’ happy. And, I still am. Just not as happy as I could be. If I made different choices.

So, here we are back at The Happiness Code’s first principle: choices. 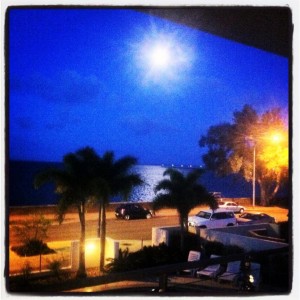 Too much information? Too wanky? Too much talk of self-actualisation and other rah-rah stuff. Too bad!

And, do you know what? I may have ‘some’ worries and stresses. I may need to focus more (but less!) on my health and fitness, but as I sit back and look at the glorious view from my sea-change balcony, I realise I have it pretty good.

So… I choose happy.

Do you choose happy?
Or, did I make you throw up in your mouth a little? (And are you wondering where the ‘Life is fucked and everything sucks!’ Deborah has gone?)