I’ve mentioned, a few times, my sojourn at Fat Camp a couple of years ago where I lost 14kg in a month. We were allowed 700-900 calories a day and did between 3 – 5 hours of exercise. It was what I needed at the time, and I seriously regret that I didn’t continue with my efforts once arriving home. I did okay for a little while, but I wasn’t able to sustain the type of diet we’d had at Camp; nor was I able to do anywhere near the same level of exercise. Nevertheless I lost another 5kg or so, before injuring my hip and having to stop EVERYTHING, including pilates which I’d been doing for years at that stage.

The weight slowly started appearing before it leapt back on board. Before I knew it I’d gained 5kg more than the 20kg I’d lost.

I know the type of program I followed at Fat Camp has its critics (and I sometimes am one of them), but I have to accept the blame for not continuing to lose weight when I arrived home. I felt cast adrift as I hadn’t thought or planned enough about how I would exist ‘on the outside’. But, all was not lost, I learnt a number of valuable lessons: about food, dieting and exercise, and also about myself.

But more on the esoteric touchy feely crap some other time. This post is about food.

Carbohydrates were forbidden at Fat Camp. Fruit was off the menu along with some vegetables (potatoes, peas, corn, beans etc). Consequently, once I’d given up the eating plan I binged on nothing-but-carbs for weeks on end. Although I talk about myself as a carbohydrates fiend, I am a bit picky. I don’t mind pasta; I like rice; but potatoes are my all time favourite thing (as I have already posted here and here). Having said that, I have also been known to develop the odd fetish for popcorn, corn chips and tasty cheese / nacho cheese flavoured rice cakes. (Yes, one needs to be specific about this!)

But, although I hate to admit it (and it kills me to type these words out) I know I lose more weight when I reduce my carbohydrate consumption. Egad! Yes indeed. I have actually found I don’t need to give them up entirely (thank god!) but even if I go carbohydrate-free at night, I seem to lose more weight. Now this could very well be because I usually consume about 7 large potatoes a night or 1kg of frozen chips when I am eating carbs; rather than going without. Nevertheless, since starting this weight loss program I am really only eating (a supposedly) minimal amount of carbohydrates 3-4 nights a week, although I’m still eating carbs at breakfast and lunch when the opportunity rises.

This has meant that, in addition to the meals on our program menu, I’ve had to come up with a few options of my own and this is where I’ve taken some of my Fat Camp lessons and put them to good use. 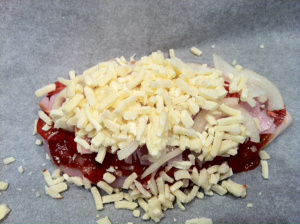 One of my favourite meals from my time there was the chicken pizza. It is a bit of a variation on chicken parmigiana and the like, but seriously smells like real pizza. I’m not even a pizza lover, but adore the smell of this. And it’s the perfect recipe for someone like me who usually doesn’t want to cook or eat until late in the evening. I can put this together& shove it in the oven and then go and loll in the bath and do some writing for an hour or so and voila! it is ready to go. It even heats up well for lunch if you have leftovers.

It isn’t complicated and it’s a no-carbohydrate alternative to real pizza: 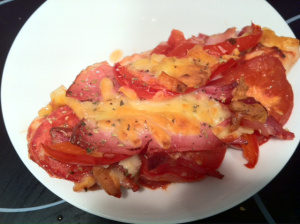