Yesterday I wrote about the guilt that had been festering away all weekend after indulging in popcorn two days in a row. On both occasions the bowls of air-popped corn weren’t additional ‘treats’ but rather a dinner and a lunch – which in itself is probably not a good (or sensible) thing. But – it could have been worse. Once upon a time I considered popcorn to be the Cinderella of my carbs addiction. Corn chips generally filled the role of the ugly step-sister – hosting far more calories and still consumed with a sour cream dip… just in case I hadn’t consumed enough calories in the 1000+calorie bag.

The thing I like about the weight loss program I’m on, isn’t just the non-dieting focus – many on the program are doing a ‘lean and strong’ version, which is less about losing weight than reshaping your body; but also the fact that carbohydrates are not touted as the enemy, because I’ve confessed MANY times to my carbohydrate addiction (and the fact that I could happily live solely on potatoes for the rest of my life).

Sure, our program recommends low GI carbohydrates (as opposed to potatoes, my great love!) but they’re there on the suggested menu plans. EVEN IN THE EVENING you’ll find risotto, sweet potato and pasta etc on the suggested menu plans. I was thrilled to discover they weren’t forbidden. And comforted. I’ve been on my share of no-carb and low-carb diets. At Fat Camp, for example, I went for a month without ANY carbohydrates, including fruit and some veges and the like. Of course, once off those kind of diets, I eat nothing but carbs for days and weeks on end.

But if I’m really honest (and I probably should be!), carbohydrates are not my friend. I do MUCH better on no carb diets. I lose weight quickly (as do most people) but I throw in the towel just as quickly. However, even on low carb diets, or no carbs-at-night diets, I get results. It’s just that – in the past – I’ve been loath to pursue them. (Being the ‘all or nothing’ gal that I am!) 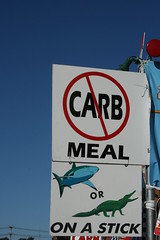 As a fussy eater, I haven’t been dutifully following Michelle’s menu plan, rather focussing on the 1200 calorie limit and making healthy choices. I often eat carbohydrates for breakfast, in the form of gluten-free toast (I am coeliac) with an egg/bacon for breakfast, or cereal mixed with yoghurt on occasions. I mostly eat soup for lunch when at work, although I occasionally take leftovers. Dinner is my danger time on the carbohydrates-front and my antipathy towards other vegetables doesn’t help.

I’ve mentioned before that dinner is my favourite meal of the day. Whether it’s because I (used to) over-indulge in potato / rice / pasta; or whether it’s because I’ve got the whole night ahead of me so tell myself that I DESERVE stodgy comfort foods I’m not sure. But, I’m proud to say that for most of this program I have limited my evening carbohydrates. I still have potatoes on 3-4 nights a week, but the remaining nights I go carb-free, indulging in fish and salsa or stir fries, or my Fat Camp favourite, chicken pizza. And it seems to be working. I don’t feel too deprived, as I get to have potatoes on occasions and I get cereal or toast as well. (Not to mention the occasional bowl of popcorn!)

We are now nearing the end of this Round of the program (which is repeated three times a year). As a result, to step up our weight loss, our fearless leader Michelle has introduced an ‘Accelerator’ Day for the last 4 weeks. Essentially it’s a carbohydrate-free day the day before the Wednesday morning weigh-in. As I was already doing something similar (going carb-free on Monday and Tuesday nights), it is quite doable for me.

I know the carbohydrates vs no carbohydrates debate will roll on for years. But I’ve come to believe it’s far more sustainable to consume sensible carbohydrates, rather than banning them completely. And frankly I’m far more excited about my serving of pasta or faux chips (ie. potato cut like chips, zapped in microwave, sprayed with olive oil spray and grilled) than I used to be when I took them for granted and scoffed a kilogram at a time. So perhaps it’s true what they say… all good things in moderation….